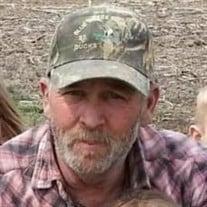 Leslie “Les” Allen Bateman, Sr., age 67, of Albia, Iowa, passed away on Monday, March 21, 2022, at his home. Les was born on September 13, 1954, to Francis Allen Jr. and Dalene (Gardner) Bateman at the hospital in Oskaloosa, IA. Les grew up and attended school in Cedar Rapids and later in Albia, graduating from Albia High School with the Class of 1972. On November 4, 1972, he was united in marriage to Rita Kay Lowe at the Salem Methodist Church in Cedar Rapids and to this union, 3 children were born, Debbie, Les Jr. and Julie. Les and Rita shared 32 years of marriage prior to Rita’s passing on July 10, 2005. Les worked at Wilsons, a meat packing plant which later became Farmstead, from 1972 until they closed in 1990. He then went to work at Payless Cashways as a delivery driver. Lastly, Les worked for the street department in Cedar Rapids until his retirement in 2013. Les was a member of Salem Methodist Church in Cedar Rapids. He loved being outdoors, gardening, riding around in his Gator on the pasture paths he mowed, especially with his cousin Annie, hunting, fishing and horseback riding. While living in Palo, he dug out a pond on his land that he raised koi fish in. He went to auctions and collected toy trains, which he set up not only in his home, but also around his koi pond. Les was a great cook, known for his goulash, homemade pizza, hot sauced chicken hearts, and his secret ingredient, sugar. He loved his dogs, especially his labs, Jack, Lady, Lacey, Libby, Marley, and Rose. He loved to tease and had a great sense of humor but above all, Les’s family was everything to him and he cherished all of the time spent with them. Les is survived by his children, Debbie Sullivan, Les Bateman Jr., and Julie (Kevin) Klawiter; 9 grandchildren, Molly, Preston, Chloe, Parker, Korbin, Madison, Maci, Brock, and Lily; 2 great grandchildren, Liam and Hayden; his mother, Dalene; and his sister, Lorie Bateman. Les is also survived by several aunts, uncles, cousins and good friends. He is preceded in death by his wife, Rita; his father, Francis; as well as other family members. Visitation will be held from 2:00 p.m. to 8:00 p.m. on Wednesday, March 30, 2022, at the Tharp Funeral Home in Albia, with Les’s family present throughout the day and evening to greet family and friends. A memorial service will be held at 11:00 a.m., Thursday, March 31, 2022, at the Tharp Funeral Home in Albia with Deb Black officiating. A private family burial will be held at a later date. An open memorial has been established for the family.

The family of Leslie "Les" Allen Bateman Sr. created this Life Tributes page to make it easy to share your memories.

Send flowers to the Bateman family.