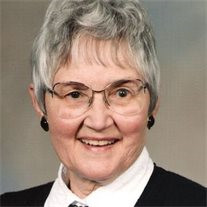 Lela June Woodland, age 87, of Albia, Iowa died Monday, August 6, 2007 at Oakwood Nursing and Rehabilitation Center in Albia. She was born January 20, 1920 in Monroe County, Iowa to Roy Wesley and Goldie (Tyrrel) Cooper. After the death of Lela's mother, Goldie, Roy remarried and he and Bertha (Tyrell) raised Lela. She married Chuck Woodland on April 13, 1942 in Unionville, MO. Lela was a graduate of Albia High School. She worked and retired from Chamberlain Manufacturing in Albia. She was a member of Cornerstone Community Church in Albia. She was very devoted to her faith as she enjoyed listening to Christian tapes, and enjoyed taking care of her house. Lela is survived by her husband, Chuck of Albia; one brother, Loren (Betty) Cooper of Oregon; three sisters, Lois Jean (Junior) Thomas of Avery, Leola Jeanette (Gerald) Boender of Eddyville, and LaVonne Arlene (Tom) Bills of Albia. She is also survived by several nieces and nephews. Her parents; and one brother, Roy Cooper, Jr. precede Lela in death. Funeral services will be held at 11:00 A.M. Thursday, August 9, 2007 at Cornerstone Community Church in Albia with Pastor Rick Smith officiating. Burial will be in Oakview Cemetery in Albia, Iowa. Visitation will open after 12:00P.M.Wednesday, August 8, 2007 at the Winfield Funeral Home in Albia with the family being present from 6-8 P.M. Wednesday evening. Memorials have been established to Cornerstone Community Church in Albia.

The family of Lela June Woodland created this Life Tributes page to make it easy to share your memories.

Send flowers to the Woodland family.