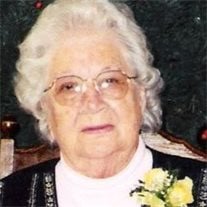 Lela Mae Hirchak, age 85, of Albia, died Saturday afternoon, November 22, 2008, at her residence in Albia, Iowa. Lela Mae was born December 2, 1922 in Moravia, Iowa to Archie Ray and Myrtle "Lavenia" (Stephens) Main. She was a graduate of Albia, High School, class of 1941. Lela Mae married Robert Owens in 1942. They were blessed with three children before Robert died in 1961. She later married Joseph Hirchak on March 17, 1964. Joseph died in June of 1993. Lela Mae was a very active lady. She was a homemaker for her three children. She worked and later owned and operated the Albia Taxi Company, and she was a lifelong volunteer for St. Mary's Catholic Church and the Altar and Rosary, of which she was a member. Lela Mae is survived by two sons, James Richard Owens and wife Peggy of Albia, and Jay Bernard Owens also of Albia; and one daughter in law, Gloria Owens of Lovilia; 5 grandchildren, Jimmy Joe, Megan, Jason, Justin, and Tyler Owens; and three great grandchildren, Hunter, Carter, and Jayden Owens. She is also survived by two brothers, Max Main of Albia, and Clarence Main of Kansas City, Missouri; and one sister, Dorothea Ridgeway of Nevada. Lela Mae is preceded in death by her parents, Archie and Lavenia; her husbands, Robert Owens and Joseph Hirchak; one son, Jerry Stephens Owens; one brother, Jack Main; and one sister, Leona McCombs.

The family of Lela Mae Hirchak created this Life Tributes page to make it easy to share your memories.

Send flowers to the Hirchak family.