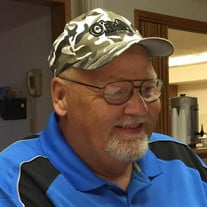 Lawrence “Larry” David Kausalik, age 57, of Albia, passed away peacefully after an extended illness on November 12th, 2017 at the Mercy Medical Center in Des Moines, Iowa. Larry was born on July 25, 1960 to Harold “Had” and Betty (Smith) Kausalik in Albia, Iowa. He grew up and attended Albia High School graduating with the Class of 1979. After high school, he worked as an over the road truck driver mainly in the Cedar Rapids area for many years before he was forced to retire due to health reasons. Larry had an extremely good sense of humor and was well liked by all who knew him. He was very fond of his nieces and nephews and they thought of him more of an older brother than an uncle. He is survived by his seven brothers and sisters, Frances (Jack) Manley of Albia, Barbara (Denny) Maddy of Marion, IA, Ed (Linda) Kausalik of Grimes, IA, Phil (Ruth) Kausalik of Waukee, IA, Mim (Dennis) Kurimski of Melrose, IA, Kristine Kausalik (Don Bouslaugh) of Ankeny, IA, Angie (Wally) Wagner of Oelwein, IA, and a sister-in-law, Meg Kausalik of Pewaukee, WI. Larry was preceded in death by his parents Harold “Had” and Betty Kausalik and a brother, Martin Kausalik. A celebration of life will be held on December 9, 2017 from noon until 4:00 p.m. at the Eagles Lodge in Albia. An open memorial has been established in Larry’s name and may be sent to Angie Wagner, P.O. Box 655, Oelwein, IA 50662.

The family of Lawrence "Larry" David Kausalik created this Life Tributes page to make it easy to share your memories.

Send flowers to the Kausalik family.