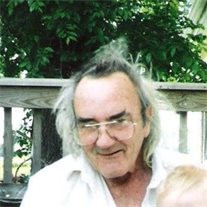 Larry Lee Morrow, age 68, died Sunday, April 1, 2007 at the VA Medical Center in Knoxville, Iowa. He was born June 1, 1938 in Ottumwa, Iowa to Keith and Edith (Elkins) Morrow. He married Nancy J. Bates January 1, 1985 in Centerville Iowa. Larry was Veteran, serving in the Unites States Navy. After the service he worked as a Gas Station Attendant in the Ottumwa and Blakesburg areas. He had also worked with his father in construction. Larry and his family are affiliated with the River of Life Family Worship Center in Albia. Larry is survived by his wife, Nancy of Albia; three step children, Patricia Jones of Albia, Garry Kent of Oxford, Iowa, and Teri Kent of Keokuk, Iowa; step grandchildren: Michael, Brian, Devin, Chanel, Jacob, and Tara, and one daughter also survives Larry. He was preceded in death by his parents. Funeral Services will be held at 1:00 P.M. Wednesday, April 4, 2007 at Winfield Funeral Home in Albia with Pastor Brad Gray officiating. Burial will follow at Memorial Lawn Cemetery in Ottumwa with Military Rites conducted by the O.B. Nelson American Legion Post No. 3 and V.F.W. Post No. 775 both of Ottumwa. Visitation will be Tuesday, April 3, 2007 opening to the public at 2:00 P.M. and the family will be present from 6-8 P.M. Tuesday Evening. Casketbearers will be: Garry Kent, Michael Kent, Devin Kent, Brian Jones, Danny Hudson, and Joe Black Memorials may go to the family.

The family of Larry Lee Morrow created this Life Tributes page to make it easy to share your memories.

Send flowers to the Morrow family.