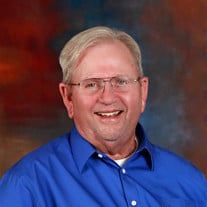 Larry Nile Lennie, age 74, of Albia, passed away on Monday, January 8, 2018, at Mercy Medical Center in Des Moines surrounded by his family. Larry was born on August 9, 1943 to James and Mabel (Wagaman) Lennie in Ottumwa, Iowa. He grew up and attended the Albia High School graduating with the Class of 1961. On September 5, 1964 he was united in marriage to Rose Eloise Kenworthy in Georgetown, Iowa. To this union five children were born, Mike, Joe, Dan, David and Jill. Larry and Rose shared 53 years of marriage. Larry worked at John Deere Ottumwa Works as a machinist for 37 years until retiring. He was a member of St. Mary’s Catholic Church and a past member of Monroe County Cattlemen’s Club, Knights of Columbus, a proud member of the U.A.W., a superintendent of the swine barn at the Monroe County Fair and was also a past leader of Troy Troopers 4-H Club. Larry loved all aspects of farming and working outside. He enjoyed going to all county fairs and cattle shows. Attending the Monroe County Fair and Iowa State Fair were always a requirement for Larry and Rose. He was an avid movie watcher. Larry was very social. After his retirement he could be found having breakfast at Hy-Vee or lunch at the Snack Shack where he always enjoyed conversations with people coming and going. He and Rose would frequent the Highway Café, the North End Restaurant and would go to Pizza Hut with a special group every Sunday. Larry is survived by his wife, Rose Lennie of Albia; his children, Mike (Jennifer) Lennie of Centerville, Dan (Deborah) Lennie of Albia, David (John Koch) Lennie of Ottawa, Canada; 8 grandchildren and step-grandchildren, Ryan (Amber) Lennie of Albia, Nicki (Josh) Farrington of Albia, Morgan Thomas of Centerville, Aaron Lennie of Salt Lake City, UT., Melissa Morgan of Denver, CO., Gaelen Morgan of Des Moines, Brianna Morgan of Iowa City and Olivia Morgan of Ames and one great grandchild, Kylie Lennie. Larry is also survived by many nieces, nephews, cousins and good friends. He was preceded in death by two children, Joe and Jill Lennie; his parents, James and Mabel Lennie; mother and father-in-law, Herbert and Katie Kenworthy and brothers-in-law, Val Mannens, Tom Kenworthy and Larry Stewart. A Mass of Christian Burial will be held at 10:30 a.m., Saturday, January 13, 2017 at St. Mary’s Catholic Church in Albia, with Father Michael E. Volkmer C.PP.S. officiating. Burial will follow services at St. Mary’s Cemetery in Albia. Visitation will be held from 12:00 p.m.-8:00 p.m. Friday, January 12, 2017 at the Tharp Funeral Home in Albia, with Larry's family present throughout the day. A Christian Wake Service will be held at 6:00 p.m. In lieu of flowers a memorial has been established to a building project at the Monroe County Fairgrounds.

Larry Nile Lennie, age 74, of Albia, passed away on Monday, January 8, 2018, at Mercy Medical Center in Des Moines surrounded by his family. Larry was born on August 9, 1943 to James and Mabel (Wagaman) Lennie in Ottumwa, Iowa. He... View Obituary & Service Information

The family of Larry Nile Lennie created this Life Tributes page to make it easy to share your memories.

Send flowers to the Lennie family.