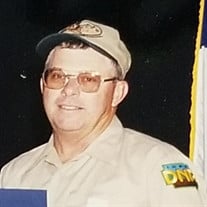 Larry Kenneth Good, age 73, of Albia, passed away on Wednesday, July 29, 2020, at Golden Age Care Center in Centerville, IA, under the care of EveryStep Hospice. Larry was born on October 16, 1946, to Kenneth and Betty Maxine (Smothers) Good at their home in Davis County. Larry attended school in Bloomfield and graduated from the Bloomfield High School. Following high school, Larry served his country in the National Guard. He was united in marriage to Patricia Fitzgerald and to this union 2 children, Jenny and Scott were born. Larry and Patricia later divorced. On June 22, 2002, Larry was united in marriage to Barbara Ranes at their home in Monroe County. Larry and Barbara shared 18 years of marriage prior to his passing. Larry worked for the Iowa Department of Natural Resources for 39 years as a Wildlife Technician. During his time there, he oversaw 7 different counties and was stationed first at Lake Wapello and later at Honey Creek. He was an avid outdoorsman, referring to himself as “a steward of the land”. He loved turkey, pheasant, and deer hunting, as well as fishing, and also enjoyed cutting wood and gardening. Larry enjoyed watching his grandchildren’s sporting events, attending every game. Larry also enjoyed having coffee and visiting with friends at the Highway Restaurant in Albia and loved traveling to the mountains to camp with his family. Larry is survived by his wife, Barbara Good; a daughter, Jenny (Paul) Huston; a son, Scott (Crissie Skinner) Good; a daughter-in-law, Shanda Good; 10 grandchildren, Kohl, Shawn, Addison, Ayden, Avery, Nathan, Ryan, Hayden, Will, and Blake; a sister, Sharry (Travis) Wood; and a nephew, Todd. Larry is also survived by many cousins and good friends. He was preceded in death by his parents, Kenneth and Betty and a niece, Tonya Tubbs. Visitation will be held from 2:00 p.m. until 8:00 p.m., Monday, August 3, 2020 at the Tharp Funeral Home in Albia, with Larry’s family present from 6:00-8:00 p.m. to greet family and friends. A memorial service will be held at 1:00 p.m., Tuesday, August 4, 2020, at the Tharp Funeral Home in Albia, with Pastor Terry Roberts officiating. Military honors provided by the American Legion of Albia, Melrose, and Lovilia will follow services in the parking lot at the funeral home. Burial will follow services at the I.o.o.f. Cemetery in Bloomfield, IA. In lieu of flowers, a memorial has been established to EveryStep Hospice.

Larry Kenneth Good, age 73, of Albia, passed away on Wednesday, July 29, 2020, at Golden Age Care Center in Centerville, IA, under the care of EveryStep Hospice. Larry was born on October 16, 1946, to Kenneth and Betty Maxine (Smothers)... View Obituary & Service Information

The family of Larry Kenneth Good created this Life Tributes page to make it easy to share your memories.

Larry Kenneth Good, age 73, of Albia, passed away on Wednesday,...

Send flowers to the Good family.