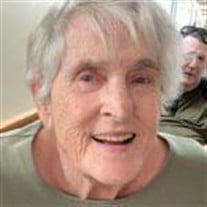 LaDean Ann Lloyd, age 82, of Albia, passed away on Thursday, May 28, 2020, at the Monroe County Hospital in Albia. LaDean was born on March 1, 1938, to John and Minnie (Stice) McCammant in Montezuma, IA. She grew up and attended school in Davenport, graduating with the class of 1956. She married Robert Lloyd and to this union, 3 sons, Robert Jr., Richard, and Roger, were born. LaDean and Robert later divorced. LaDean worked a few different jobs before taking a job with Banquet Foods where she was Union President for UFCW Local Chapter 410 for 16 years. She later worked as the office manager for Quinn Concrete in Marshall, MO, until she retired. LaDean enjoyed traveling to many different places while working, including San Francisco, the Bahamas, New Mexico, Texas, Washington D.C., and Chicago. She enjoyed knitting, crocheting, and reading. LaDean was an excellent cook who could prepare absolutely anything, but was known for her fried chicken, brisket, and desserts, such as chocolate pie and cookies. Her love for spending time with her family and friends, especially her grandchildren, added to her love for family gatherings for the holidays, especially Christmas. LaDean is survived by 2 sons, Richard and Roger Lloyd; 4 grandchildren, Marcus Major, Shaine Major, Tylar Major, and Michaela Lloyd and their mother, Stacey Crabbe; and her good friend, Jenn Lau. LaDean is also survived by many nieces, nephews, cousins, and good friends. LaDean is preceded in death by a son, Robert Lloyd Jr.; her mother, Minnie Felger; and 3 brothers, Floyd, Freddy, and Marvin. Visitation will be held from 2:00 p.m.- 8:00 p.m. on Monday, June 1, 2020, at the Tharp Funeral Home in Albia, with LaDean’s family present to greet family and friends from 6:00-8:00 p.m. A graveside funeral service will be held at 11:00 a.m. on Tuesday, June 2, 2020, at Lipp Cemetery in Putnam County, MO, with Jeremy McElvain officiating. A memorial has been established to Lipp Cemetery in Putnam County, MO.

LaDean Ann Lloyd, age 82, of Albia, passed away on Thursday, May 28, 2020, at the Monroe County Hospital in Albia. LaDean was born on March 1, 1938, to John and Minnie (Stice) McCammant in Montezuma, IA. She grew up and attended school... View Obituary & Service Information

The family of LaDean Ann Lloyd created this Life Tributes page to make it easy to share your memories.

Customized sympathy cards. Mailed for you.