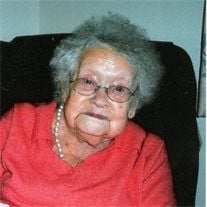 LaVonne Evelyn Chidester, age 93, of Albia, Iowa died Saturday, April 28, 2007 at the Monroe Care Center in Albia, Iowa. She was born December 19, 1913 in Bussey, Iowa to William Arthur and Inez (Jewell) DeWitt. She married Basil Leo Chidester on April 11, 1936 in Unionville, Missouri. He passed away on December 2, 1986. She was a homemaker, and also was a Farmer and Coalminers wife. LaVonne was a wonderful housekeeper, mother, and cook. She was a member of the First Christian Church in Albia. She is survived by one son, Larry (Twila) Chidester of Albia; one brother, Floyd DeWitt of Chariton, and one sister, Geneveive Lewis of Albia. Three grandchildren, Stacy Allen Chidester, Lori Ann Watson, and Larry B. Chidester, and one great granddaughter, Grace Olivia Watson also survive LaVonne. Her parents, husband, two brothers, Carl and Dale "Bob" DeWitt; and two sisters, Pauline Johnson and Esther Peterson precede her in death.

The family of LaVonne Evelyn Chidester created this Life Tributes page to make it easy to share your memories.

Send flowers to the Chidester family.