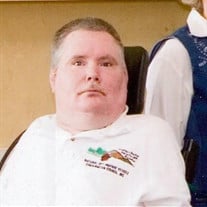 Kevin Leroy Bunch age 52, of Albia, passed away on Tuesday, May 9, 2017 at Iowa Methodist Hospital in Des Moines. Kevin was born on April 10, 1965 to Walter and Sherry (Blomgren) Bunch in Albia, Iowa. He grew up in Lovilia and attended school in Albia, graduating with the Class of 1983. After High School he worked at Allied Construction and was an apprentice on his way to becoming a Journeymen until he was injured. In March of 1986 he was united in marriage to Tammy Robinson. To this union his daughter Whitney was born. Kevin was a member of the Carpenters Union #106 in Des Moines. He was a very talented painter using just his mouth and inspired countless students in many districts with demonstrations of his painting technique and helped them to set and accomplish goals for themselves. Kevin was a very competitive wrestler in his high school days and made it to the state tournament his sophomore year. He continued to have a strong support for the Albia Wrestling Program after high school. He designed many things including a work bench, a miniature bulldozer to help with snow removal and modified a gun that together, John McDonald and he constructed so that Kevin could continue to pursue his love of deer and turkey hunting. He enjoyed being outdoors, fishing, collecting and shooting guns, reloading ammunition, working on his paintings and playing farming games on the computer. His real joy in life was spending time with his friends, his daughter, nieces, nephews and especially his grandchildren. Kevin is survived by his daughter; Whitney (P.J.) Tedford of Jacksonville, FL; his mother, Sherry Clark of Centerville; four grandchildren, Leah, Abigail, Elayna and Caroline; a brother, Steve (Dawn Worthington) Bunch of Lovilia; a sister, Michelle (Hugh) Scieszinski of Mt. Vernon; his nephews and nieces, Stephan (Josie) Bunch, Katie (Bryce) Oswalt, Susanne, Jacob, Mallory and Jayden Scieszinski; grandmother, Edith Blomgren. He is also survived by aunts, uncles, cousins and many very close friends. He was preceded in death by his father, Walter; his grandparents, James and Irene Bunch and Wilmer and Susie Blomgren; his step-father, Robert Clark. The Bunch family would like to thank everyone who provided wonderful care to Kevin over the past thirty-one years since his accident. You were an important part of his life and we are forever grateful. Funeral services will be held at 2:00 p.m., Saturday, May 13, 2017, at the Trinity United Methodist Church in Albia, with Pastor Roger Henry and Pastor Lynda Carlson officiating. Burial will follow the service at Woodlawn Cemetery in Lovilia. Visitation will be held from 3:00 p.m. – 8:00 p.m., Friday, May 12, 2017, at the Tharp Funeral Home in Albia, with Kevin’s family present from 5:00 p.m. – 8:00 p.m. to greet family and friends along with a time of sharing stories and memories at 7:00 p.m.

Kevin Leroy Bunch age 52, of Albia, passed away on Tuesday, May 9, 2017 at Iowa Methodist Hospital in Des Moines. Kevin was born on April 10, 1965 to Walter and Sherry (Blomgren) Bunch in Albia, Iowa. He grew up in Lovilia and attended... View Obituary & Service Information

The family of Kevin Leroy Bunch created this Life Tributes page to make it easy to share your memories.

Kevin Leroy Bunch age 52, of Albia, passed away on Tuesday, May...

Send flowers to the Bunch family.