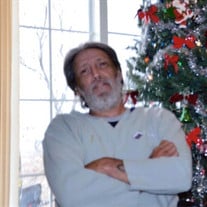 Kenneth “Kenny” James Kendall, age 58 of Bussey, passed away Saturday, July 8, 2017, at Iowa Methodist Medical Center in Des Moines. Kenny was born on May 6, 1959, to Norman “Squeak” and Patricia “Marty” (Bregar) Kendall in Albia, Iowa. He attended high school at Twin Cedars. After high school, Kenny went to work at Rolscreen in Pella and then to work at the Durham Mine. He was very talented at drawing. He enjoyed listing to music, and playing cards, especially Solitaire. Kenny also loved to work on cars and was an ace in his wheelchair. Above all, he cherished spending time with his family and friends. Kenny is survived by his mother, Marty Kendall; a brother, Dean Kendall; 2 sisters, Peggy Kendall and Lisa Selby; and his nieces and nephews, Heather Goemaat, Terry Keegel, Chris Kendall, Patrick Kendall, Matthew Kendall, and Michaela Stewart. He is also survived by several great-nieces and great-nephews, cousins, and good friends. He was preceded in death by his father, Squeak; a sister, Kay Tucker; 2 nephews, Chad Kendall and Nick Kendall; a sister-in-law, Cindy Kendall; 2 brothers-in-law, Donny Tucker and Richard Selby and his best friend, James Gullion. Funeral services will be held at 10:00 a.m., on Tuesday, July 11, 2017, at the Tharp Funeral Home in Albia with Vince Goemaat officiating. Burial will follow services in Liberty Cemetery in Bussey. Visitation will be held on Monday, July 10, 2017, from 3:00-8:00 p.m. at the Tharp Funeral Home with Kenny’s family present from 5:00-8:00 p.m.to greet family and friends. An open memorial has been established to the family.

The family of Kenneth "Kenny" James Kendall created this Life Tributes page to make it easy to share your memories.