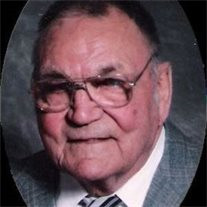 Kenneth Edgar Fisher, age 92, of Albia died Saturday, August 18, 2007 at his home in Albia. He was born June 23, 1915 in Monroe County, Iowa to Elmer and Elizabeth (Bailey) Fisher. He married Irene Harmon on August 25, 1945 in Unionville, Missouri. Kenneth first worked on a farm near Tama and after his marriage to Irene he farmed with his father for several years in Blakesburg. Kenneth and Irene then bought a farm in Iconium and farmed and raised horses, cattle and pigs. In 1969 Kenneth and his family moved to Albia and he worked for National By-Products in Des Moines for 21 years, retiring in 1980. He loved raising horses, fishing and playing bingo. He also enjoyed going to sales, buying antiques and restoring them. Kenneth dearly loved his family as he loved to attend his children and grandchildren's sporting events and activities. He was a member of the Church of the Brethren in Monroe County and former member of the Blakesburg Saddle Club. He is survived by his wife Irene of Albia, one daughter, Darlene Sisler of Albia and one son, Mike (Brenda) Fisher of Albia; 6 grandchildren, Lisa Hoffman, Ilene Smith, Loren and Eric Sisler, Amanda and Aaron Fisher; 11 great grandchildren, Michael, Megan, Baylie, Blake, McKenzie, Brook, Joshua, Zachary, Colton, Erika and Kyle. His parents, one son-in-law, Ronald Sisler; 4 sisters, Esta Osburg, Eva Hoover, Bessie Mazke, Cora Bates; and 3 brothers, Ralph, Marion and Lloyd Fisher precede Kenneth in death. Funeral services will be held at 10:00 A.M. Wednesday, August 22, 2007 at the Winfield Funeral Home in Albia with Rev. Lois Williams officiating. Burial will follow in the Blakesburg Cemetery in Blakesburg, Iowa. Visitation will open after 11:00 A.M. Tuesday, August 21 at the Winfield Funeral Home in Albia with the family present from 6-8 P.M. Tuesday evening. Casketbearers will by grandsons, Loren and Eric Sisler, Aaron Fisher, Michael Kirk, Blake Smith and Mark Maugher. Honorary Casketbearers will be Joshua, Zachary and Kyle Sisler and Colton Smith. An Open Memorial has been established.

The family of Kenneth Edgar Fisher created this Life Tributes page to make it easy to share your memories.

Send flowers to the Fisher family.