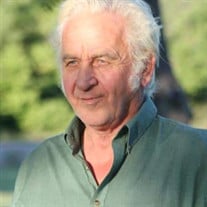 Kenneth Leroy Bentley, age 70, of Oskaloosa, passed away on Wednesday, February 27, 2019, at the University of Iowa Hospitals in Iowa City, Iowa. Kenneth was born on August 19, 1948, in Naples, IL, to Loren and Lena (Pruett) Bentley. He grew up and attended school in Illinois. On May 14, 1983, he married Alzina McKim Davis in Jacksonville, IL. They lived in many of the southern states before moving to Iowa in 1991. Kenneth worked on a ship as a long shipman, was a marble maker, drove a cab, and was an over the road truck driver. He most recently managed the BP station in Albia. He enjoyed being outdoors, camping, flower gardening, and mowing his yard keeping it very well manicured. He enjoyed motorcycles, watching professional wrestling, listening to old Elvis music, playing cards, going on road trips and driving fast. Kenneth loved spending time with his family and attending family gatherings. He loved kids, especially babies. He had a great sense of humor and was a wonderful father. His family relates that he is the best thing that ever happened to them. Kenneth is survived by his wife, Alzina of Oskaloosa, IA; 5 children, Chris Bentley of Sylvester, GA, Dallas Davis of Oskaloosa, IA, Terry (Travis) Cassill of Shell Knob, MO, Michelle Ratliff of Oskaloosa, IA, and Dawn (Dell) Elder of Oskaloosa, IA; 11 grandchildren, 7 great grandchildren; a brother, Robert (Rose) Bentley of Jacksonville, IL; and a sister, Rosemary (Carl) Raleigh of Cholchester, IL. Kenneth is also survived by numerous nieces, nephews, cousins, and good friends. He was preceded in death by his parents, Loren and Lena; his grandparents; a grandson; a sister, Ida Mae; 4 brothers, Terry, Loren, and Jerry Bentley, and Ronnie Bentley in infancy. Visitation will be held from 2:00 p.m. until the time of service on Tuesday, March 5, 2019, at the Tharp Funeral Home in Albia, with Kenneth's family present to greet family and friends. Funeral services will be held at 5:00 p.m., Tuesday, March 5, 2019, at the Tharp Funeral Home in Albia, with Roger McKim and Pastor Dustin Sample officiating. Per Kenneth’s wishes, his body will be cremated following services and he will be laid to rest in Jacksonville, IL, at a later date. An open memorial has been established to the family.

Kenneth Leroy Bentley, age 70, of Oskaloosa, passed away on Wednesday, February 27, 2019, at the University of Iowa Hospitals in Iowa City, Iowa. Kenneth was born on August 19, 1948, in Naples, IL, to Loren and Lena (Pruett) Bentley. He... View Obituary & Service Information

The family of Kenneth Leroy Bentley created this Life Tributes page to make it easy to share your memories.

Kenneth Leroy Bentley, age 70, of Oskaloosa, passed away on Wednesday,...

Send flowers to the Bentley family.