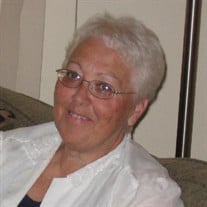 Kathy Ann (McCannon) Mendoza, age 71, of Albia, IA, passed away on Friday, April 1, 2022, at the Ottumwa Regional Hospital in Ottumwa, IA. Kathy was born on September 26, 1950, at the Smith Hospital in Albia to James O. and Ruth A. (Golden) Henderson. She grew up on the family farm in rural Albia. She attended country school, Lovilia School for 4th-8th grade, and then the Albia High School, graduating with the Class of 1968. Kathy then went to Iowa Tech. (now Indian Hills Community College) in Ottumwa where she obtained an Associate’s Degree in Secretarial Service. Kathy married Dale McCannon on August 31, 1979, and they later divorced. Kathy married Felipe Mendoza on September 24, 2009. Kathy was blessed with 2 sons, John Everett and Mark Raymond McCannon. Kathy worked at Chariton Valley Electric before going to work at Chamberlains Manufacturing in Albia. She then worked at the Iowa Department of Human Services in Monroe, Lucas, Mahaska, Davis, Appanoose and Wapello Counties, where she was employed for nearly 35 years before retiring in 2009. While growing up, Kathy enjoyed being outdoors, helping with the farm work, fishing and going for walks. In her younger years, she was a member of the Fraternal Order of Eagles in Albia and participated in the women’s bowling league. She was an animal lover of all kinds, especially her dog, Mitzy. She loved to read and watch television, especially football games. She enjoyed baking and collecting angels and snowmen. Above all else, Kathy enjoyed spending time with her family and friends, especially her grandchildren. Kathy is survived by her husband, Felipe Mendoza; 2 children, John (Rose Willey) McCannon and Mark (Heather) McCannon; grandchildren, Lucas, Rylie, and Camden; and a brother, James (Angie) Henderson. Kathy is also survived by nephews, J.D. (Morgan) Henderson and Lance (Audrey Rockwell) Henderson and a niece, Abbey Henderson Kathy was preceded in death by her parents, James and Ruth Henderson; a grandson, Nicholas Alex McCannon; and a sister, Karen Ann Henderson. Visitation will be held from 2:00 p.m.-7:00 p.m. on Tuesday, April 5, 2022, at the Tharp Funeral Home in Albia, with Kathy’s family present from 4:00 p.m.-7:00 p.m. to greet family and friends. Funeral services will be held at 10:30 a.m. on Wednesday, April 6, 2022, at the Tharp Funeral Home in Albia, with Pastor Terry Chapman officiating. Burial will follow services at Union Chapel Cemetery in Albia.

Kathy Ann (McCannon) Mendoza, age 71, of Albia, IA, passed away on Friday, April 1, 2022, at the Ottumwa Regional Hospital in Ottumwa, IA. Kathy was born on September 26, 1950, at the Smith Hospital in Albia to James O. and Ruth A. (Golden)... View Obituary & Service Information

The family of Kathy Ann (McCannon) Mendoza created this Life Tributes page to make it easy to share your memories.