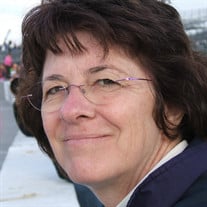 Kathryn J. Cartwright was released from this life on Friday August 12, 2016. She was born in Chicago, Illinois on November 6, 1951 to Frank and Patricia (Jacques) Cartwright. Kathy grew up in Homewood, IL and graduated from Homewood Flossmoor High School in 1969. She attended the University of Northern Illinois where she received a B.S. in Biology in 1976. Her love of native wildflowers and other plants is something she carried with her throughout her life. Kathy went on to attend the University of Iowa where she received a M.S. in Environmental Engineering in 1980. It’s there she met and fell in love with her future husband Joseph McDonald of Albia, Iowa, a fellow student and bicycling enthusiast at U of I. They lived briefly in Minneapolis, MN where Kathy worked for the Cooperative Power Association. Then they moved to Madison, WI where Kathy worked for the Wisconsin Department of Natural Resources and made several longtime friends. Kathy went on to pursue additional studies at the University of Wisconsin where she also taught and worked at the UW Arboretum. She subsequently worked for several environmental engineering consulting firms. She ended her career working for over a decade with the Wisconsin Community Action Program where she assisted low income communities with sewer and water projects. Kathy was a Master Gardener and freely shared her deep knowledge of plants and skill in gardening. She helped start the Community Gardening program in Cottage Grove, WI and volunteered considerable time with The Prairie Enthusiasts restoring native prairie areas. In her “free” time she liked to follow baseball (“Go Brewers”) and explore nature all across the country. She is survived by her husband, Joseph McDonald; a brother, Frank Jr.; and several wonderful nieces and nephews. Kathy was preceded in death by her mother, Patricia; who also died much too young from the frontotemporal dementia that claimed Kathy. She was also preceded in death by her father, Frank; and a sister, Audrey. A visitation will be held at the Tharp Funeral Home in Albia, IA from 4 to 7 on Wednesday August 17, 2016. A memorial service will be held at a future date in Madison, WI. Memorials, in lieu of flowers, may be made to the Alzheimer’s Association to aid in their efforts with a wide range of dementias; or to the Nature Conservancy to aid in their work preserving native habitats. Both were causes close to Kathy’s heart. We would also like to express our gratitude to the staff of the Monroe Care facility where Kathy was well cared for during the final chapter of her life.

Kathryn J. Cartwright was released from this life on Friday August 12, 2016. She was born in Chicago, Illinois on November 6, 1951 to Frank and Patricia (Jacques) Cartwright. Kathy grew up in Homewood, IL and graduated from Homewood Flossmoor... View Obituary & Service Information

The family of Kathy J. Cartwright (McDonald) created this Life Tributes page to make it easy to share your memories.

Kathryn J. Cartwright was released from this life on Friday August...