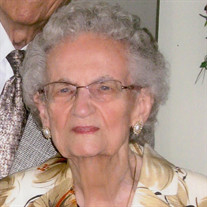 Kathryn Ann (Seibert) Burkman, age 92, of Albia, passed away Tuesday, December 11, 2018, at the Monroe Care Center in Albia. The daughter of George and Teresa (Benton) Seibert, she was born July 8, 1926, in Albia. She was the fifth of ten children for George and Teresa. On October 3, 1942, Kathryn was united in marriage to Robert L. Burkman and their marriage was blessed with five children. During their 75 years of marriage, Kay and Bob lived in Albia until his work took them to Des Moines where they resided for 30 years. Upon his retirement, they returned home to Albia. Kay is survived by her 4 children, Nancy Newcomb of Urbandale, Rita (Bill) Henderson of Greentop, MO, Roger (Sue) Burkman of Dexter, and Mark (Kathleen) Burkman of Cedar Rapids; one daughter-in-law, Catherine Ann Burkman of Albia, 10 grandchildren and 15 great-grandchildren. She is also survived by 2 brothers, Jim (Sharon) Seibert of Eagle Grove and Dick (Barb) Seibert of Waukee; and a sister, Georgina (Walt) Seibert-Beary of Cedar Rapids. Kay is preceded in death by her husband, Bob; her parents, George and Teresa; 2 sisters, Frances and Patty; 4 brothers, George, Bob, Jack and Calvin; a son, Richard; a son-in-law, Bill; 2 granddaughters, Rhonda and Sheryl; and a great-grandson, Matthew. Her early years of life and marriage were spent keeping the home front running while her husband was serving in WWII as well as caring for her younger siblings. Being a stay-at-home mom, she was always there for everyone and could do anything she set her mind to. She enjoyed being a Cub Scout Mom, helping with church activities (Methodist Youth Fellowship Group, Choir where she played the piano, Adult Sunday School Classes and Bible Study), and school activities (PTA, Band Parents etc.) Then there were grandchildren which she dearly loved. Everyone could depend on Grandma Kay and Grandpa Bob to attend special occasions or just stop by for a visit. During the years she and Bob lived in Des Moines, they, along with their daughter, Nancy, owned “Family Affair Ceramics” traveling the state participating in craft shows. Kay was well known for her painting techniques which reached a professional level giving great details to all of her ceramic pieces. The “eyes” she painted brought life and personality to thousands of pieces of ceramics. For several years Kay was an Avon distributor and enjoyed making new friends, sharing products with everyone, collecting Avon Bottles and being a member of an Avon Club in Des Moines. For the past several years, she and her scissors have cut thousands upon thousands of coupons for military families stationed around the world. With the passing of Kathryn, we, like many other families, have a big void in our lives. Something that only love, support of one another, family and friends, and time can heal. We are together and moving forward as she would want us to do. Of all the roles she played in her life we liked the one of “Mom” the best. The family wishes to express sincere appreciation and heartfelt gratitude for all the love and kindness shown to them during this difficult time. Visitation will begin at 11:00 a.m. until 8:00 p.m., Thursday, December 13, 2018, at Tharp Funeral Home in Albia with Kay’s family present throughout the day and evening to greet family and friends. The Tharp Funeral Home has been entrusted with arrangements. Funeral services will be held at 11:00 a.m., Friday, December 14, 2018, at Trinity United Methodist Church in Albia, with Pastor Roger Henry officiating. Immediately following the funeral service, a luncheon will be served at the church in the fellowship hall. Burial will take place after the luncheon at Oak View Cemetery in Albia. Memorials may be made to the Trinity United Methodist Church, Victorian Stroll or donor’s choice. Condolences may be left for the family at www.tharpfh.com.

Kathryn Ann (Seibert) Burkman, age 92, of Albia, passed away Tuesday, December 11, 2018, at the Monroe Care Center in Albia. The daughter of George and Teresa (Benton) Seibert, she was born July 8, 1926, in Albia. She was the fifth of... View Obituary & Service Information

The family of Kathryn Ann Burkman created this Life Tributes page to make it easy to share your memories.

Send flowers to the Burkman family.