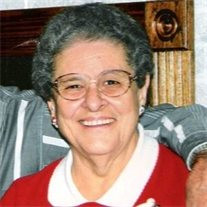 Katherine Louise Overmyer, age 75, of Albia, Iowa died Friday, May 4, 2007 at her home, of rural Albia. Katherine was born September 21, 1931 in Albia, Iowa to Wayne and Minerva (Hunter) Barnes. Katherine was a graduate of Albia High School, class of 1949. After graduation she moved and worked for a short time in Des Moines. She married Robert George Overmyer on September 21, 1951 at the Kendall Place in Albia. Robert died February 16, 2006. Katherine was a wife, mother, and homemaker most of her life. In recent years she worked part-time for the Hy-Vee Food Store in Albia. Katherine was a member of the Wo-Helo Club and was very active with her high school class reunion committee. Five children, Sharon (Larry) Hemm of Eldon, Bobbi (John) Bassett of Knoxville, Debbie (Mike) Berrier of Ottumwa, Peggy Terrell of Knoxville, and Scott (Jayme) Overmyer of Albia; 10 grandchildren; and 9 great grandchildren survive her. Also surviving is one sister, Ruthann Cretsinger of Arvada, Colorado; and one brother, Larry Barnes of Pella. Her parents, Wayne and Minerva; and her husband, Robert precedes her in death. Funeral services will be held Tuesday, May 8, 2007 at 10:30 A.M., at the Winfield Funeral Home in Albia, with Elder Lois Behrens officiating. Burial will follow services at Oak View Cemetery in Albia. Visitation will open Monday afternoon, May 7th at the Winfield Funeral Home with the family present from 6-8 P.M. Monday evening. A memorial has been established to Hospice of Monroe County.

The family of Katherine Louise Overmyer created this Life Tributes page to make it easy to share your memories.

Send flowers to the Overmyer family.