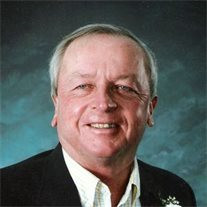 Judge Patrick Curran, age 60, of Melrose, Iowa, died Sunday, September 24, 2006 at the Iowa Methodist Medical Center in Des Moines, after a courageous 22 month battle with cancer. Judge was born November 8, 1945 in Melrose to C.D. and Rose (Judge) Curran. They preceded him in death. Judge was a graduate of Albia High School, class of 1963, and after high school he graduated from World Wide School of Auctioneering in Mason City. Judge married Maureen Carr at St. Patrick's Catholic Church in Georgetown, on February 23, 1974. Judge was an auctioneer and co-owner and manager of the Russell Sale Company in Russell, Iowa, for 42 years. Judge also farmed and raised cattle. Judge is survived by his wife of 32 years, Maureen Curran of Melrose; his children, Jay Curran and wife Melanie, and granddaughter Finley of Pleasant Hill, daughter Jill Evans and husband Monty, and grandson Owen of Ankeny, and son, Randy Curran and Jenny Johnson both of Des Moines. Judge is also survived by his sisters, Mary Lou Fitzgerald (Bill), Pauline Whittington, Dorothy Steinberg (Jack), Charlene Hannam (Ed), RoseA Vestal (Jerry); and his brothers, John Joe Curran (Margie), Danny Curran (Jean); and a very large extended family of nieces, nephews, and great nieces and nephews. Funeral services will be held at 10:30 A.M., Wednesday, September 27, 2006, at St. Patrick's Catholic Church in Melrose. Burial will be held, following services, at Mt. Calvary Cemetery, in Melrose. Visitation will be open Tuesday September 26, 2006 at the Winfield Funeral Home, with the family present from 2 to 4:00 P.M. Visitation will begin at St. Patrick's Catholic Church in Melrose, with the family present at 6:00 P.M., Tuesday evening. Burial will be held, following services, at Mt. Calvary Cemetery, in Melrose. Judge was an inspiration to everyone that knew him. He was an optimistic person who enjoyed everyday of his life. Judge loved his family and friends dearly. He enjoyed his occupation and everyone he came in contact with along the way. Memorials may be given to St. Patrick's Catholic Church of Melrose or Melrose Betterment.

The family of Judge Patrick Curran created this Life Tributes page to make it easy to share your memories.

Send flowers to the Curran family.