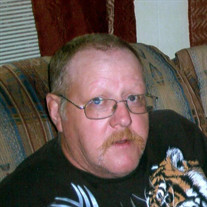 Joseph Bradley “Brad” See, age 66, of Knoxville, passed away on Monday, December 7, 2020, at his home in Knoxville. Brad was born on November 12, 1954, to Bernie “Curly” and Laura Agatha (Husted) See at home in Monroe County. He grew up and attended school in Albia, graduating from the Albia High School with the Class of 1973. In January of 1977, he married Cindy Beal at the Trinity United Methodist Church in Albia and to this union, 4 children were born, Mashell, Jerade, Travis, and Jennifer. Brad worked was a gas man for APCO before doing janitorial work for the Lincoln Middle School in Albia and then First Iowa State Bank in Albia. He was then an iron worker for APG before going to work as a mechanic and later a supervisor for Thomas Highway 5 in Albia. He most recently worked at Lambirth’s in Attica. Brad enjoyed being outdoors, hunting, fishing, mushroom hunting, and arrowhead hunting. He was very talented and enjoyed building things for others, such as a deck for his sister and picnic tables for his children. Brad was a mentor and father-figure to many children while coaching the Mets and Cardinals in Little League, as well as taking many of the kids fishing. He was also an avid St. Louis Cardinals fan. Brad was willing to help anyone in need and loved to visit with his family and friends, especially his grandchildren. Brad is survived by his children, Mashell (John Irvine) Spinler, Travis (Samantha) See, and Jennifer (Jonathan) Barker; 7 grandchildren, Tyler, Nicole, Riley, Blake, Ava, Addison, and Bailey; and 2 sisters, Janice (Richard) Jourdan and Tina Shaffer. He is also survived by several nieces, nephews, cousins, and good friends. He is preceded in death by his parents, Curly and Agatha; a son, Jerade; 3 sisters, Phyllis Rosenboom, Elizabeth Culberston, and Kathy Maupin; and 3 brothers, Jim, Roy, and Roger See. Visitation will be held from 11:00 a.m.-1:00 p.m. on Thursday, December 10, 2020, at the Tharp Funeral Home in Albia, with Brad’s family present to greet family and friends. A memorial service will be held at 1:00 p.m. on Thursday, December 10, 2020, at the Tharp Funeral Home in Albia, with Jason Summers officiating. A private family burial will be held at a later date. Due to the most recent proclamation and enhanced public health measures for the state of Iowa, masks will be mandatory for all those in attendance over the age of 2 for both visitation and the funeral service. An open memorial has been established to the family to be determined at a later date.

The family of Joseph Bradley See created this Life Tributes page to make it easy to share your memories.

Send flowers to the See family.