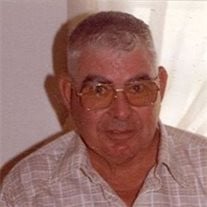 Joseph Casper Evans, age 86, of Albia, Iowa died Wednesday, March 29, 2006 at the Pella Regional Health Center in Pella, Iowa. He was born April 12, 1919 in Hiteman, Iowa to Benjamin and Jenny (Manley) Evans. He married Margaret Evelyn Gasper on June 7, 1941 in Des Moines, Iowa. Joe was a graduate of Hiteman High School. He was a veteran of World War II, serving in the US Army. He was stationed in England and France in the European Theatre. He was a lifelong farmer who loved the outdoors, especially hunting and fishing. One of Joe's passions was soil conservation as he had worked for Monroe County Soil Conservation service. He was involved in the initial planning and development of Miami Lake State Park. He was also Chairman of the Monroe County Draft Board. He was an avid reader of western and historical novels. He is survived by his wife, Margaret Evans of Albia; 7 children, Joan (Richard) Reece of Marina Del Ray, CA, Joseph (Wilma) Evans, Jr. of Beaverton, OR, John (LaVonne) Evans of Quincy, IL, William (Carolyn) Evans of Enumclaw, WA, James (Shirley) Evans of Maple Valley, WA, Mary (Mark) Hanchar of Paris, France, and Marlene Evans of Des Moines, IA; 12 grandchildren and 5 great grandchildren. Also surviving are two brothers, Robert (Mary) Steinbach of Des Moines, IA and Tom Steinbach of Chewlah, WA. Joe was preceded in death by his parents, Benjamin and Jenny, and stepfather, Tony Steinbach; one daughter, Karen Balmer; two sisters, Margaret and Wilma; and one brother, David. Funeral services will be held at 11:00 A.M. Saturday, April 1, 2006 at the Winfield Funeral Home in Albia. Burial with Military rites will be in the Oakview Cemetery in Albia. Visitation will open after 9:00 A.M. Saturday, April 1 at the Winfield Funeral Home in Albia with the family present until the time of the service at 11:00 A.M. In Lieu of Flowers, memorials have been established to the Albia Public Library or to a charity of the donor's choice.

The family of Joseph Casper Evans created this Life Tributes page to make it easy to share your memories.

Send flowers to the Evans family.