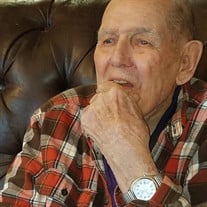 John Wesley Weir, age 87, of Albia passed away on Thursday, June 6, 2019, at the Monroe Care Center in Albia. John was born on September 24, 1931, in Ottumwa, IA, to John E. and Ruth (Snyder) Weir. He attended school in Blakesburg, IA. John married Joanne Kelley on January 10, 1952, in Newton, IA, and to this union, 7 children were born, Bob, Bernie, Joni, Annie, Jim, Mike, and Kelley. John and Joanne shared 36 years of marriage prior to Joanne passing away on October 14, 1988. John worked at Chamberlains in Albia prior to owning and operating Weir Appliance in Albia where he worked on appliances for many years. After retiring, John then worked as a delivery driver for Plumb Supply and also went to college at William Penn in Oskaloosa where he graduated with his Bachelor of Arts degree in Sociology and Criminology in 1991. John was a member of the American Legion Howard Cessna Post #136 in Albia. He enjoyed woodworking, making a variety of things including toys, toy boxes, and knife holders. In later years after his eyesight diminished, he enjoyed making rugs. Family was everything to John and above all, he enjoyed spending time with his children, grandchildren, and great grandchildren. John is survived by 6 children, Bernie Weir, Joni Weir (Wayne Norden), Annie (Bob) Klebe, Jim (Bea) Weir, Mike (Tracy) Weir, and Kelley (Tim) Hulgan; a daughter-in-law, Paulette Weir; 12 grandchildren; 16 great grandchildren; and his longtime friend, Charlotte Raley. He was preceded in death by his wife, Joanne; a son, Bob Weir; and his parents, John E. and Ruth Weir. Visitation will be held from 4:00 p.m.-7:00 p.m. on Sunday, June 9, 2019, at the Tharp Funeral Home in Albia, with John’s family present throughout the evening to greet family and friends. A rosary will be held at 4:00 p.m. led by St. Mary’s Altar and Rosary Society. A Mass of Christian Burial will be held at 10:30 a.m., Monday, June 10, 2019, at St. Mary’s Catholic Church in Albia, with Father Michael E. Volkmer, C.PP.S. and Father Bernie Weir officiating. Burial will follow services at St. Mary’s Cemetery in Albia. In lieu of flowers, a memorial has been established to the Iowa Association of the Blind.

John Wesley Weir, age 87, of Albia passed away on Thursday, June 6, 2019, at the Monroe Care Center in Albia. John was born on September 24, 1931, in Ottumwa, IA, to John E. and Ruth (Snyder) Weir. He attended school in Blakesburg,... View Obituary & Service Information

The family of John Wesley Weir created this Life Tributes page to make it easy to share your memories.

Send flowers to the Weir family.