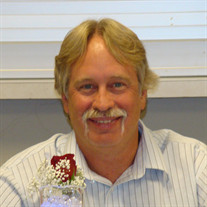 John Van Wardhuizen unexpectedly left this world on Monday, August 12, 2019, at his home in Lovilia, Iowa. John was born on November 30th, 1962 at the Monroe County Hospital to Arnold Sr. and Erma Alice (Beck) Van Wardhuizen. He graduated from Albia Community High School with the class of 1981. Later, John attended Indian Hills and graduated with a degree in welding, working for Star Coal in Lovilia. Afterwards, he worked at Maytag in Newton until their closing, affording him an opportunity to return to school. First, John studied at DMACC, apprenticing at ULC, and later became a High Voltage Operator Electrical Maintenance Journeyman. John travelled extensively throughout the region testing switches at substations to keep the power grid working. John enjoyed his job very much; his co-workers easily became his friends. A 15 year member of Make it or Break It, John served as a Vice President, and Treasurer over the years. He enjoyed building specialized vehicles and running them with his friends through trails and the mud. John felt that the people in MIOBI were part of his extended family. He was a motorcycle enthusiast who loved riding his Harley Davidson Sturgis bike, being outdoors, and experiencing the open highway. At home, John gardened tomatoes and other homegrown vegetables, putting meat on the smoker, and sharing with his family and friends. Always ready for a new project, John loved working with mechanics at home, fixing and improving his various machines. John was an all-around great guy and a great neighbor who was always willing and ready to help anyone who needed it. He was loved, respected, kind, fun, caring, reliable, and easily lit up the room with his smile. He is survived by his siblings, Richard (Debra) Van Wardhuizen of Albia, Arnold Jr. (Marilyn “Hope”) Van Wardhuizen of Ottumwa, Wayne (Jonith) Van Wardhuizen of Melcher Dallas and Beth (Craig) Morgan of Albia. John is also survived by several nieces, nephews, cousins, and many, many good friends, including “man’s best friend”, Festus. He will be sorely missed by us all. John was preceded in death by his parents, Arnold Sr. and Erma; a sister, Mary Ellen Van Wardhuizen; and an uncle, John Van Wardhuizen; and “man’s best friend”, Cody. Visitation will be held from 2:00 p.m. until 8:00 p.m., Friday, August 16, 2019, at the Tharp Funeral Home in Albia with John’s family present from 5:00 until 8:00 p.m. Funeral services will be held at 10:30 a.m., Saturday, August 17, 2019, at the Tharp Funeral Home in Albia, with Pastor Richard Schlotter officiating. Following the service, John’s body will be cremated and a private burial will be held at Oak View Cemetery at a later date.

The family of John Van Wardhuizen created this Life Tributes page to make it easy to share your memories.