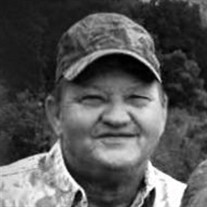 John Franklin Stewart Sr., age 58, of Albia, passed away on March 17, 2018, at his home in Albia surrounded by his loved ones. John was born on May 27, 1959, in Bloomfield, IA, to Albert Sr. and Irene (Brown) Stewart. He grew up and attended school in Albia. He married Georgetta Lawrence in December of 1976 and she passed away in 1978. He married Terri Hopkins on January 30, 1987, in Albia and they shared 31 years of marriage prior to his passing. John worked for Chamberlains in Albia prior to going to work at Loren Lamb Roofing. He later worked for salvage yards, including Witt’s Auto Salvage and Courtney’s Car Crushing. John also worked for the City of Albia and Tom’s Tree Service. He was active and enjoyed bowling as well as doing things outdoors, such as fishing, camping, deer hunting, mowing, and attending and participating in demolition derbies. Above all, he loved spending time with his family and friends, especially his grandchildren. John is survived by his wife, Terri Stewart of Albia; his children, Misty (Jimmie) Skinner of Corydon, Laura (Paul) Belt of Corydon, John Jr. (Pauletta Rhodes) Stewart of Albia, Jessica (Nick) Kendall of Albia, and Tyson Hackett of Albia; 4 sisters, Betty (Bob) Tidball of Chillicothe, Ruth Seidel of Rawlings, WY, Sandy (Jerry) McKim of Albia, and Rhonda (Paul) McKim of Albia; a brother, Albert Stewart Jr. of Ottumwa; 12 grandchildren, Austin, Jayden Joshua, Jacob, Rylie, Emily, Hayden, Taylor, Chayse, Blake, Jaxon, and Trinity; a sister-in-law, Jodi (John) Toopes; and his dog, Reggie. John is also survived by several nieces, nephews, cousins and good friends….and Uncle Joe. He is preceded in death by his parents, Albert Sr. and Irene; a wife, Georgetta Stewart; a grandchild, CJ Kendall in infancy; a brother, Carl Brown, Sr.; 2 sisters, Marie Cassatt and Patricia Stewart; a brother-in-law, LeRoy Seidel; his father and mother-in-law, Jim and Pat Hopkins; a very close friend, Greg DeMoss; and many uncles, aunts, and cousins. John is also preceded in death by his beloved dog, Ozzie. Visitation will be held from 11:00 a.m. until 8:00 p.m., Tuesday, March 20, 2018, at the Tharp Funeral Home with John’s family present from 6:00 p.m.-8:00 p.m. to greet family and friends. A funeral service will be held at 11:30 a.m., Wednesday, March 21, 2018, at the Tharp Funeral Home in Albia. Burial will follow services at Selection Cemetery in Monroe County. A memorial has been established to the family.

John Franklin Stewart Sr., age 58, of Albia, passed away on March 17, 2018, at his home in Albia surrounded by his loved ones. John was born on May 27, 1959, in Bloomfield, IA, to Albert Sr. and Irene (Brown) Stewart. He grew up and attended... View Obituary & Service Information

The family of John Franklin Stewart Sr. created this Life Tributes page to make it easy to share your memories.