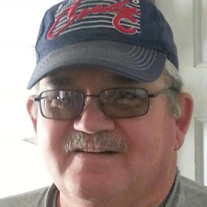 John Earland Smead, age 70, of Albia, passed away on Monday, July 13, 2020, at the Monroe Care Center in Albia. John was born on July 10, 1950, to Johnnie Mansfield and Betty Elaine (Myers) Smead at home in Albia. He grew up and attended school in Albia, graduating from the Albia High School with the Class of 1968. On May 30, 1987, he was united in marriage to Carol Van Egdom at the First Christian Church Memorial Hall in Albia and to this union a son, John, was born. John and Carol shared 33 years of marriage prior to his passing. John worked at Maytag in Newton before working at Monroe Plastics in Albia. He later managed the car wash in Albia before taking a job at Pella Corp. where he was employed for 25 years until his retirement. John enjoyed being outdoors, fishing, hunting, and golfing. He loved to go for rides to visit with family and friends and to sit and watch the trains go by. In his younger years he enjoyed bowling. John was an avid Chicago Cubs fan and also enjoyed watching the Iowa Hawkeyes and Dallas Cowboys. His true joy in life was spending time with his family and friends, especially his son, nieces, and nephews. John is survived by his wife, Carol Smead; his son, John Smead; and 2 sisters, Peggy Smead and Betty (Benji) Thompson. John is also survived by several nieces, nephews, cousins and good friends whom he loved dearly. He is preceded in death by his parents, Johnnie and Betty Smead; 2 brothers, George “Ned” Smead and David Dewey Smead; and a sister-in-law, Debbie Smead. A Celebration of Life service will be held at a later date. In Lieu of flowers a memorial has been established to the family.

John Earland Smead, age 70, of Albia, passed away on Monday, July 13, 2020, at the Monroe Care Center in Albia. John was born on July 10, 1950, to Johnnie Mansfield and Betty Elaine (Myers) Smead at home in Albia. He grew up and attended... View Obituary & Service Information

The family of John Earland Smead created this Life Tributes page to make it easy to share your memories.

Send flowers to the Smead family.