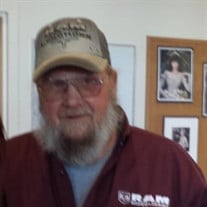 John Elsworth Nichols Jr., age 72, of Hamilton, Iowa, passed away on April 1, 2022, at his home, under the care of Hospice of Pella. John was born on June 21, 1949, at the hospital in Freeport, Illinois, to John Sr. and Evelyn (Schoonhoven) Nichols. He grew up attending schools in Illinois, Wisconsin, and Iowa before joining the Iowa Road Builders where he worked on resurfacing roads. John served his country in the United States Army and spent 22 months in Vietnam where he was crew chief for a helicopter and was also a wrecker driver. On March 9, 1974, John was united in marriage to Kim Anderson in Lovilia, IA, and to this union, 3 children were born, Rosely, Johnnie, and David. John and Kim shared 48 years of marriage prior to his passing. Upon returning from the service, John owned and operated Nichols Tree Service for 6 years and farmed his whole life. In his younger years, John enjoyed drag racing. He also enjoyed working with horses in the riding stables. He bought and sold many horses as well as broke many horses. He loved the outdoors doing things such as gardening, fishing, working the ground, putting up hay and was an avid mushroom hunter. He enjoyed hunting and processing meat in his smoker and was always sharing his latest concoction with someone. He was involved in rodeos. He and Kim enjoyed leather work, repairing saddles and selling tack and other western items. John was a talented mechanic who could work on anything. He was proud of his ’48 Chevy and his AC7000 tractor. John had a great sense of humor, was ornery and was always teasing around with others. John loved his family and friends and cherished the time spent with them, especially his grandchildren. John is survived by his wife, Kim; 3 children, Rosely (Josh) Imler, Johnnie Nichols, and David (Jenny Kirkpatrick) Nichols; and 6 grandchildren, Samantha, Kacie, and Logan Clark, Averie and Courtnie Imler and Kohlton Kirkpatrick. John is also survived by many cousins, good friends, and his rodeo family. He was preceded in death by his parents, John Sr. and Evelyn Nichols. Per John’s wishes, his body has been cremated. A private family service will be held. A Celebration of Life Service will also be held from 12:00 p.m.-4:00 p.m. on Saturday, April 9, 2022, at The Gathering Grounds, 2125 Hwy 5, Bussey, IA 50044. Cards of condolences can be sent to the family at 2258 Vermont Dr., Hamilton, IA 50116.

John Elsworth Nichols Jr., age 72, of Hamilton, Iowa, passed away on April 1, 2022, at his home, under the care of Hospice of Pella. John was born on June 21, 1949, at the hospital in Freeport, Illinois, to John Sr. and Evelyn (Schoonhoven)... View Obituary & Service Information

The family of John Elsworth Nichols Jr. created this Life Tributes page to make it easy to share your memories.

Send flowers to the Nichols family.