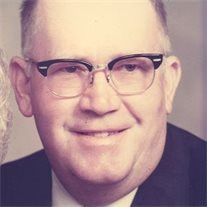 John Harold (Speed) Nesbit, age 90, of Albia, Iowa died Thursday, March 9, 2006 at the Monroe County Hospital in Albia. He was born November 2, 1915 in Albia, Iowa to Harry B. and Jennie Drane (Pollock) Nesbit. He married Dorothy Eloise Huston on October 12, 1935 in Lancaster, Missouri. She died August 30, 1998. Harold was a truck driver. In his younger years, he hauled coal miners to mines in Monroe County. He retired from Watson's Gas Company. He was a Mason, as he was a 50 plus year member of the Astor Lodge No. 505 in Albia. He enjoyed hunting and raising Beagel dogs. He is survived by two daughters, Karen (Terrance S. ) Tuttle of Albia and Linda (James R.) Spaur of Victoria, TX; 6 grandchildren, Jeff (Espy) Tuttle, Jennie (Doug) Pistek, John Tuttle, Deedee (John) Uresti, Dawn Spaur, and Dori Wedemeier; 8 great grandchildren, Bonnie and Jacob Uresti, Megan Montez, Jarret and Cody Wedemeier, Andrew and Anthony Tuttle, and Ashley Brennan. Also surviving are two nieces Jane Hoover of Riuados, NM and Sharon (Tom) Kanouse of El Paso, TX. Harold was preceded in death by his parents; his wife; and one sister, Mary Beth Kennedy. His body has been cremated. A visitation will be held from 10 A.M. until 11:00 A.M. Monday, March 13, 2006 at the Winfield Funeral Home in Albia with the family present. A prayer service will follow the visitation officiating by Rev. Rick Smith. A private family burial of cremains will be held at the Oakview Cemetery. A memorial has been established to Hospice of Monroe County.

The family of John Harold Nesbit created this Life Tributes page to make it easy to share your memories.

Send flowers to the Nesbit family.