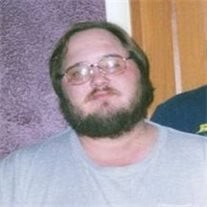 John Wesley Major, age 37, of Albia passed away on May 11, 2016, at his mothers' home in Russell, Iowa. John was born on November 6, 1978, to Gary and Mary Ann (Parker) Major in Oskaloosa, Iowa. He grew up and attended school in Albia, graduating from the Albia High School with the class of 1997. After high school, John received his CDL and attended IHCC for Diesel Mechanics. John was an over the road truck driver for several companies and hauled numerous items coast to coast for 8 years. John worked on the family farm, which was his true passion in life. He also helped at his grandparent's business, H & R Repair. He was very talented at fabricating and was good with electrical work. John enjoyed being outdoors, especially riding his motorcycle and farming. He also enjoyed assisting Brad Williams with projects, such as restoring antique tractors. Above all, he enjoyed spending time with family and friends. John is survived by his mother Mary Ann (Don) Schramm; his father, Gary (Cathy) Major; 3 brothers, Harold (Amy) Major, Ed Major, and David (Jessica) Major; his grandfather, Harold Parker; and 2 step brothers, Donald III and Derick Schramm. John is also survived by 8 nephews, Justin (Jessica) Manser, Bradley, Michael, Bret, Westin, Lucas, Blake, and Rylan; a niece, Rebekah; a step nephew, Matthew; great nephews, Logan, Lukas and Treyton; great niece, Brooklynn; and good friends, Jake (Sarah) DeMoss. He was preceded in death by his grandparents, Della Ruth Parker and Jim and Ellen Haines. A funeral service will be held at 6:00 p.m., Thursday, May 19, 2016, at the Tharp Funeral Home in Albia, with Angie Phillips officiating. Per John's wishes, his body will be cremated following services and a private family burial will be held at a later date. Visitation will be held from 2:00 p.m. until the time of service on Thursday, May 19, 2016, at Tharp Funeral Home in Albia, with John's family present. Memorials may be made to American Gothic Home Care or the family.

John Wesley Major, age 37, of Albia passed away on May 11, 2016, at his mothers' home in Russell, Iowa. John was born on November 6, 1978, to Gary and Mary Ann (Parker) Major in Oskaloosa, Iowa. He grew up and attended school in Albia, graduating... View Obituary & Service Information

The family of John Wesley Major created this Life Tributes page to make it easy to share your memories.