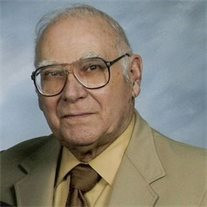 John DeCet, age 84, of Knoxville formally of Albia, passed away Saturday, December 6, 2008 at the Good Samaritan Center in Ottumwa, Iowa. John was born in Hocking, Iowa (Monroe County) on April 19, 1924 to Annibale and Teresa (Scala) DeCet. He graduated from Albia High School in 1942, and then served his country in World War II in the Army Air Corp. John married Margaret (Marge) Comstock, in Ottumwa, on September 3rd 1956; she preceded him in death on December 24th 2007. He retired from a career at the Veterans Hospital in Knoxville in 1984. John was an active member of Saint Anthony's Catholic Church in Knoxville, the Rotary Club of Knoxville, the Marion County Pony Express Riders. Riding horses with the Pony Express in parades was one of the great joys of his life. John is survived by his sister, Lucille (Roy) Johnston of Albia, brothers, Gene (Sandy) DeCet of Huston, Texas, Larry (Carolyn) DeCet of Trimble, Missouri, a sister- in- law Ann DeCet of Sierra Vista, Arizona, and many nieces and nephews who remember John as a favorite uncle who loved being around young people. John is also preceded in death by his parents, and two brothers, Alfred and Donnie DeCet. Funeral services will be held at 10:0 0A.M., Friday, December 12, 2008, at St. Mary's Catholic Church in Albia, with Rev. Michael E. Volkmer C.PP.S. officiating. Burial will follow services at St. Mary's Cemetery of Albia, Iowa. Following the burial there will be a luncheon at St. Mary's Catholic Church. Visitation will begin at 9:00 A.M., Thursday, December 11, 2008 at the Winfield Funeral Home in Albia. John's family will be present from 7 to 9:00 Thursday evening. A Christian Wake Service will also be held at the funeral home, Thursday evening at 7:00 P.M. A memorial has been established to the Marion County Pony Express or a Scholarship Fund

The family of John DeCet created this Life Tributes page to make it easy to share your memories.

John DeCet, age 84, of Knoxville formally of Albia, passed away...

Send flowers to the DeCet family.