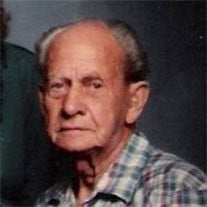 John T. Brandon, age 95, of Albia, died early Friday evening, November 7, 2008, at the Monroe County Hospital in Albia. John was born July 13, 1913, in Monroe County to John and Grace Brandon. He attended school in Monroe County and married Yvonne Petty on February 13, 1940, in Memphis, Missouri. They were married for 55 years before Yvonne died on January 15, 1996. During WWII John served his country in the U.S. Army. After his service he owned and operated Southern Iron and Metal Company. He operated the salvage company from 1946, until his retirement in 1983. John was very active all his life. He was a member of the Masonic Lodge of Albia. He enjoyed collecting classic cars, owned and raced several quarter horses, grew a very big garden for several years, and owned and farmed several farms in Iowa and Missouri. John also enjoyed attending two very special organizations; Sons of Union Veterans of the Civil War, and The Civil War Round Table of Ottumwa. John was proud to be able to tell people that he was the last surviving son of a civil war veteran in the state of Iowa. He is survived by his three children; David Brandon and wife Lillie of Knoxville, Davida Tharp of Albia, and Diane Major also of Albia; 8 grandchildren; and 13 greatgrandchildren. John is also survived by one sister, Rosella Scieszinski of Albia; and a special friend Doris Pearson of Albia. John is preceded in death by his parents, John and Grace; his wife, Yvonne; one sister, Ruie Repp; and four brothers, Ernest, Charles, Robert, and Donald Brandon. Visitation will begin at 1:00 P.M., Monday, November 10th at the Winfield Funeral Home, with the family present throughout the day and evening. Funeral services will be held at 10:00 A.M., Tuesday, November 11, 2008, at the Winfield Funeral Home in Albia, with Rev. Bill Boyd officiating. Burial will follow services at Oak View Cemetery in Albia, with military rites provided by the Howard Cessna Post #136 of Albia. A memorial has been established to the Welcome Home Soldier Memorial. Condolences may be made at www.winfieldfh.com

The family of John T. Brandon created this Life Tributes page to make it easy to share your memories.

Send flowers to the Brandon family.