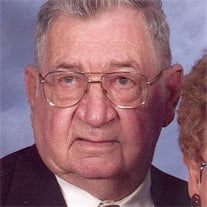 John D. Bernard, age 82, of Albia died Friday, May 19, 2006 at the Monroe County Hospital in Albia. He was born March 18, 1924 in Hocking, Iowa to Pete and Isabelle Sabline (Amoss) Bernard. He married Arlene Bettis on December 24, 1945 at the Presbyterian Church in Albia. John graduated from Albia High School and was a charter member of their FFA Program. He also was an active 4-H member and Held offices within this organization. He was president of the Rural Youth Organization, and participated in Albia's City League Baseball. He was a member of the Trinity United Methodist Church and a member of the Astor Masonic Lodge No. 505 in Albia for many years. John's employment through the years included Troy Township ASC Committee, the Mohr Ranch, Goode Feed and Seed, and Roemerman Feed and Seed. He is survived by his wife, Arlene of Albia; four daughters, Sheryl Briggs of Rock Island, IL, Shirley Walker of Ottumwa, Sandi (David) Johnson of Albia, and Sheila DeBolt of Sandwich, IL. Also surviving are 7 grandchildren and 9 great grandchildren. Debbie (Grant), Jentry, Jayce, Jarrah, and Jevin Jensen of rural Blakesburg, Darrin (Angie), Reegan, Tanner, and Dakota Walker of Friend, NE, Donnie, Austin, and Dayton Walker of Ottumwa, Thaddeus Briggs of Denver, CO, Branden Briggs of Rock Island, IL, Kirbie DeBolt and Ryan DeBolt of Sandwich, IL. John also is survived by one brother, Lolly (Mary) Bernard of Albia. He was preceded in death by his parents; and one son-in-law, Ronald Walker. Funeral services will be held at 10:30 A.M. Tuesday, May 23, 2006 at the Trinity United Methodist Church in Albia with Rev. Kevin Leveck officiating. Burial will be in Service Chapel Cemetery, north of Albia, Iowa. Visitation will open after 12 noon Monday, May 22, 2006 at the Winfield Funeral Home in Albia with the family present from 6-8 P.M. Monday evening. Casketbearers will be his grandsons, Darrin and Donnie Walker, Thaddeus and Branden Briggs, Ryan DeBolt and Grant Jensen. Honorary Casketbearers will be Bill Sullivan, Dick Spencer, Ed Overturf, Mike Kness, John Goode and Bernard Dicks. Memorials have been established to the Trinity United Methodist Church in Albia or to Hospice of Monroe County.

The family of John D. Bernard created this Life Tributes page to make it easy to share your memories.

Send flowers to the Bernard family.