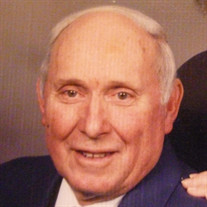 John Frederick Bain Sr., age 83, of Albia, passed away on January 12, 2017 at the Mahaska Health Partnership Hospice Serenity House. John was born on April 7, 1933 to Price and Ethel (Plum) Bain at the family farm in Monroe County. He grew up and attended Albia High School and graduated with the Class of 1951. After high school John joined the United States Army and was stationed in Europe. On March 17, 1973 he was united in marriage to Shirley Nace at the Evangelical United Brethren Church in Albia. To this union a child was born, John Jr. Together John Sr. and Shirley shared over 40 years of marriage. John was a farmer. He farmed with his brother Melvin their whole lives and they raised dairy cattle until 1996. In 1963 he started and operated the Bain Farmstead Equipment. He was a member of the Trinity United Methodist Church in Albia. He taught Sunday school and served as a trustee for Bluff Creek. John was an active member on the Service Chapel Cemetery Board for 40 years and was a past member of Farm Bureau. The past 3 years he owned the Rathbun County Music Theater. He enjoyed spending time with his family and friends. John is survived by his wife, Shirley Bain of Albia; son, John Jr. (Karen) Bain; 2 grandchildren, Sylvia and Sophie Bain all of Lovilia; a brother Melvin Bain of Albia; nieces and nephews, Linda (Pat) Kosman, Sharon (Lenny) Hofer, Betty Kraber, Joan Malone, Dennis (Teresa) Malone and Doug (Linda) Malone, John is also survived by several cousins. He is preceded in death by his parents, Price and Ethel and a sister, Alice Malone. Funeral services will be held at 10:30 a.m., Wednesday, January 18, 2017 at Trinity United Methodist Church in Albia, with Pastor Roger Henry officiating. Burial with military rites provided by the American Legion of Albia, Lovilia and Melrose will follow services at Service Chapel Cemetery in rural Albia. Visitation will be held from 3:00 p.m.-8:00 p.m. Tuesday, January 17, 2017 at the Tharp Funeral Home in Albia, with John's family present from 6 to 8 p.m. Memorials have been established to Trinity United Methodist Church in Albia.

John Frederick Bain Sr., age 83, of Albia, passed away on January 12, 2017 at the Mahaska Health Partnership Hospice Serenity House. John was born on April 7, 1933 to Price and Ethel (Plum) Bain at the family farm in Monroe County. He grew... View Obituary & Service Information

The family of John Frederick Bain Sr. created this Life Tributes page to make it easy to share your memories.

Send flowers to the Bain family.