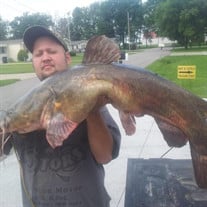 Jody Lee Price, age 41, of Moravia, IA, passed away on Sunday, October 31, 2021, at his home. Jody was born on October 7, 1980, to Larry and Cynthia Jo (Anderson) Price at the Ottumwa Hospital in Ottumwa, IA. He grew up and attended school in Albia, graduating from the Albia High School with the Class of 2000. Jody worked with his father at Price Construction operating a hoe and skid loader and putting in septic tanks. He also worked in in-home health care providing CDAC services. He was an all-around handyman and great mechanic, who could fix anything. Jody enjoyed being outdoors, deer hunting, mushroom hunting, going for rides, going to the river to fish, and going on fishing trips to Minnesota with his family. He also enjoyed watching horror movies, scrapping metal, and going to the Casino. He played on a pool league at Fat Annie’s. Jody was very outgoing, enjoyed visiting with others, flirting with others, had a great sense of humor, and never knew a stranger. Jody was very generous and had a huge heart, always willing to help anyone in anyway. He loved his animals, including his dogs, Creamy, Brownie, and Hurley, and his dad’s dog, Sammy. He raised pigs, cows and chickens in town in Moravia and was the only person that could get away with doing so. Jody’s family was everything to him. He always checked in with them and cherished the time he spent with them, especially his children, nieces and nephews whom he loved to spoil. Jody is survived by his daughter, Ana; significant other, Jessica Nye; stepchildren, Dallas (Makayla), A.J., and Ashanti; a Goddaughter, Ashlyn; his father, Larry (Stacie) Price; 4 siblings, Jenn (Dennis) Conley, Jesse (Robin) Price, Nicholas (Emily) Prevo, and Michael Prevo; a grandfather, Paul (Linda) Price; an uncle, Mike Anderson; an aunt Deb (Harold) Barnes; and his nieces and nephews, Carson, Caleb, Kaitlyn, Braydon, Grace, and Willow. Jody is also survived by many cousins and good friends. He was preceded in death by his mother, Cyndi Jo Price; and grandparents, Pauline Morrow, Jerry Anderson and Shirley (Martin) Cole. Visitation will be held from 2:00 p.m.-8:00 p.m. on Wednesday, November 3, 2021, at the Tharp Funeral Home in Albia with Jody’s family present from 6:00 p.m.-8:00 p.m. to greet family and friends. Funeral services will be held at 11:00 a.m., Thursday, November 4, 2021, at the Tharp Funeral Home in Albia with Pastor Roger Henry officiating. A private family burial will be held at a later date. In Jody’s honor, his family would like to invite anyone attending to wear their favorite flannel shirt or hoodie. In lieu of flowers, a memorial has been established to his daughter, Ana Price.

Jody Lee Price, age 41, of Moravia, IA, passed away on Sunday, October 31, 2021, at his home. Jody was born on October 7, 1980, to Larry and Cynthia Jo (Anderson) Price at the Ottumwa Hospital in Ottumwa, IA. He grew up and attended school... View Obituary & Service Information

The family of Jody Lee Price created this Life Tributes page to make it easy to share your memories.

Send flowers to the Price family.