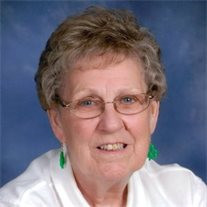 Jo Ann Rush, age 79, of Melrose, passed away Tuesday, April 12, 2016, at Genesis Senior Living in Des Moines. Jo Ann was born on August 10, 1936. In Perryville, Missouri, to William "Bill" and Alberta Hill. She graduated from North High School in Des Moines. She was united in marriage to Pat Rush at St. Ambrose Cathedral in Des Moines on June 4, 1955. They shared 60 years of marriage prior to her passing. Jo Ann worked in banking conducting audits. She worked for the Des Moines publis schools as a baker prior to retirement. She was a member of St. Patrick's Catholic Church in Melrose, the Altar and Rosary Society in Melrose, and the Green Hat Society. Jo Ann's true joy in life was spending time with her grandchildren, family and friends. Jo Ann is survived by her husband, Pat Rush; 2 daughters, Kristina Rush of Melrose and Teri (Duke) Carter of Melrose; a son, Steven (Debbie) Rush of Des Moines; 17 grandchildren; 13 great grandchildren; and a sister, Mickey Guthre of Seattle, Washington. She was preceded in death by her parents, Bill and Alberta; 2 daughters, Becki and Loretta; a brother, Billy; and a great granddaughter, Natalie Sandness. A Mass of Christian Burial will be held at 11:00 a.m., Saturday, April 16, 2016 at St. Patrick's Catholic Church in Melrose, with Father Patrick Lumsden officiating. A private family burial will take place at Mt. Calvary Cemetery at a later date. Visitation will be held from 4:00 p.m.-8:00 p.m. Friday, April 15, 2016 at St. Patrick's Catholic Church in Melrose, with Jo Ann's family present throughout. A 6:00 p.m. rosary will be led by The Green Hat Society and a wake service will be held at 6:30 p.m. A memorial has been established to the St. Patrick's Church for masses in Jo Ann's name. Condolences may be left for the family at www.tharpfh.com.

The family of Jo Ann Rush created this Life Tributes page to make it easy to share your memories.

Send flowers to the Rush family.