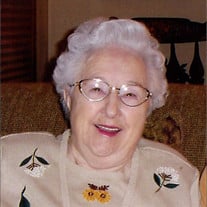 Jessie Elizabeth Matthews, age 96, of Ames formerly of Albia and Ottumwa, passed away May 23, 2016, at Northcrest Retirement Community in Ames. Jessie was born on October 10, 1919 to Albert and Margaret (Jenkins) Hoffman in Albia, Iowa. She attended Albia schools in Albia and graduating from Albia High School in 1938. She married Robert Lon Matthews, January 1, 1940. To this union was born three children Ron Matthews, Marilyn Feeken and Mark Alan Mathews. She was a member of the First Christian Church, Albia Women’s Club and the Kendall club. She helped organize and start the first school in Monroe County for mentally challenged and handicapped children, something she was very proud of accomplishing. She leaves one son son, Ron (Delores) Matthews of Ames, IA; one daughter Marilyn (Henry) Feeken of Waukee, IA; four grandchildren, three Step-grandchildren; nine great grandchildren, and six nephews. She was preceded in death by her parents; husband; son, Mark Alan, who died at the age of 18 months; one brother and two sisters. Jessie worked as a clerk in McLellans, Ben Franklin’s, Smith Drug Store and Duncan’s Bookstore. She and her husband lived on a farm north of Blakesburg, IA for 38 years where she was a significant partner in their hog and Charolaise cattle operations. She moved to Albia when her husband entered a nursing home. For the last ten years she has lived with the benefit of the excellent care provided at Northcrest Community in Ames, IA. Visitation with the family present, will be held from 9:00 a.m. until 11:00 a.m. on Friday, May 27, 2016, at Tharp Funeral Home in Albia. Funeral services will be held at 11:00 a.m., Friday, May 27, 2016, at the Tharp Funeral Home in Albia, with Pastor Lynda Carlson officiating. Burial will follow services at Oak View Cemetery in Albia.

Jessie Elizabeth Matthews, age 96, of Ames formerly of Albia and Ottumwa, passed away May 23, 2016, at Northcrest Retirement Community in Ames. Jessie was born on October 10, 1919 to Albert and Margaret (Jenkins) Hoffman in Albia, Iowa. She... View Obituary & Service Information

The family of Jessie Elizabeth Matthews created this Life Tributes page to make it easy to share your memories.

Send flowers to the Matthews family.