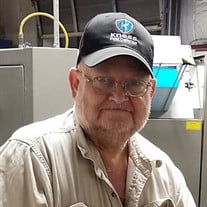 Jerry Lee Stanley, age 68, of Albia, passed away on Tuesday, January 8, 2019, at his home in Albia, Iowa. Jerry was born on July 21, 1950, to Gerald DeWayne and Madeline Leola (Phillips) Stanley at the Mahaska Hospital in Oskaloosa, Iowa. He grew up and graduated from the Bloomfield High School with the Class of 1968. On September 13, 1969, he was united in marriage to Clara Elizabeth “Cookie” Kitchen. To this union, 2 sons, David and Jim were born. In 1969, Jerry opened Stanley Standard Gas Station in Moravia, which he owned and operated until its closing in 1995. He also worked at Hormel in Ottumwa prior to going to work at Kness Manufacturing in Albia in November 1977, where he was still currently employed. Jerry enjoyed being outdoors and doing things such as camping and fishing. He was very mechanically inclined and loved doing mechanical projects. Above all, Jerry delighted in spending time with his family, especially his grandchildren. Jerry is survived by his 2 sons, David (Deana) Stanley of Pella and Jim (Angel) Stanley of Albia; 5 grandchildren, Alexandria, Shyanne, Austin, Amanda, and Nicolas Stanley; a brother, Ron Stanley; 2 sisters, Connie Shipman and Alice Stanley; and an aunt, Doris Pearson. He is also survived by several nieces, nephews, and cousins. He is preceded in death by his parents, Gerald and Madeline, a sister, Janet Summers; and a nephew, Wesley Worth Graham. Visitation will be held from 2:00 p.m. to 8:00 p.m. on Friday, January 11, 2019, at Tharp Funeral Home in Albia, with Jerry’s family present from 5:00 to 8:00 p.m. to greet family and friends. Funeral services will be held at 10:00 a.m., Saturday, January 12, 2019, at the Trinity United Methodist Church in Albia with Pastor Terry Chapman officiating. Burial will follow services at Hillcrest Cemetery in Moravia, IA. An open memorial has been established to the family.

Jerry Lee Stanley, age 68, of Albia, passed away on Tuesday, January 8, 2019, at his home in Albia, Iowa. Jerry was born on July 21, 1950, to Gerald DeWayne and Madeline Leola (Phillips) Stanley at the Mahaska Hospital in Oskaloosa,... View Obituary & Service Information

The family of Jerry Lee Stanley created this Life Tributes page to make it easy to share your memories.

Send flowers to the Stanley family.