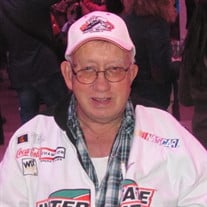 Jerry Gene Mickles, age 80, of Albia, passed away on Monday, September 2, 2019, at Mercy Medical Center in Des Moines surrounded by his family. Jerry was born on May 28, 1939, in Centerville, IA, to George Alex and Anna Wilma (McNamar) Mickles. He grew up and attended school in Centerville and later attended Auto Body and Fender school in Kansas City. On January 14, 1967, he married Susan Miller at the Community of Christ Church in Albia. Jerry worked at Chamberlains in Albia until they closed. He then volunteered delivering meals for the Leisure Lounge for 18 years, for which he was awarded several awards by the governor. He enjoyed being outdoors, feeding the birds/squirrels daily, mowing lawns, and riding his route around town on his scooter. He loved garage sales, pawn shops, auctions, flea markets, and picking up cans. Jerry loved the art of a deal and haggling with others to get items for a price he wanted. He also enjoyed traveling, making money, going to casinos, watching westerns, and collecting hats, coffee cups, pocket knives and guns. Jerry is survived by his wife, Susan Mickles; 3 children, Jerry Dale (Debbie) Mickles, Mary Jo Snider, and Suzanna (Matt) Keegel; his grandchildren, Libby (Brennan) Penner, Krista (Danielle) Jones, Haley Snider, Shayne Miller, Cooper Keegel, and one on the way; 2 great grandchildren, Eleanor and Austin; a sister, Shirley Beltic; several nieces and nephews; and all the other people that considered him a father, grandpa, uncle, or friend. He was preceded in death by his parents, George and Anna; 2 daughters, Peggy Miller and Maryanna Mickles; a son, Shayne Mickles; and a brother, Charles Mickles. A Celebration of Jerry’s life will be held on Sunday, September 15, 2019, at the Albia Eagles from 1:00 p.m.-4:00 p.m. A memorial has been established to the family.

Jerry Gene Mickles, age 80, of Albia, passed away on Monday, September 2, 2019, at Mercy Medical Center in Des Moines surrounded by his family. Jerry was born on May 28, 1939, in Centerville, IA, to George Alex and Anna Wilma (McNamar) Mickles.... View Obituary & Service Information

The family of Jerry Gene Mickles created this Life Tributes page to make it easy to share your memories.

Send flowers to the Mickles family.