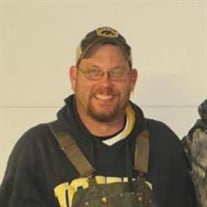 Jeremy Dean Jamieson, age 43, of Eldon, MO, formerly of Albia, IA, passed away on Saturday, January 4, 2020. Jeremy was born on November 6, 1976, at the Albia Hospital to Dave and Wanda (Wallace) Jamieson. He grew up and attended school in Albia, graduating with the Class of 1995. In August of 2005, he married Bobbi Smith and to this union a daughter, Aala, was born. Jeremy and Bobbi later divorced and on June 11, 2019, Jeremy married Tracy Morris. Following high school, Jeremy worked for the Eddyville School District before becoming the Administrator at Lake Miami in Albia. He later worked for Larry Price Construction before moving to Missouri where he worked at Innovative Procurement. Jeremy was an avid outdoorsman who enjoyed fishing and trapping, as well as hunting of all sorts. He loved his many hunting dogs over the years, especially Lil’ Ann, Old Dan, and Grant. Jeremy was a Nascar fan with his favorite driver being Kurt Busch. He enjoyed grilling, cooking and listening to music, especially Johnny Cash. His true joy in life was spending time with his family and friends, especially his daughter. Jeremy is survived by his daughter, Aala Jamieson; his wife, Tracy Jamieson; his parents, Dave (Judy) Jamieson and Wanda Long; a brother, Bill Casebolt; and Aala’s mother, Bobbi Jamieson. Jeremy is also survived by several aunts, uncles, cousins, and good friends. He was preceded in death by a brother, Scott Casebolt; and his grandparents, David John and Lois Jamieson and Ted and Sally Wallace. Visitation will be held from 9:00 a.m. until the time of service on Saturday, January 11, 2020, at the Tharp Funeral Home in Albia. Celebration of Life services will be held at 11:00 a.m., Saturday, January 11, 2020, at the Tharp Funeral Home in Albia. A private family burial will be held at a later date at Oak View Cemetery in Albia. In lieu of flowers, a memorial has been established to the family.

Jeremy Dean Jamieson, age 43, of Eldon, MO, formerly of Albia, IA, passed away on Saturday, January 4, 2020. Jeremy was born on November 6, 1976, at the Albia Hospital to Dave and Wanda (Wallace) Jamieson. He grew up and attended school... View Obituary & Service Information

The family of Jeremy Dean Jamieson created this Life Tributes page to make it easy to share your memories.

Send flowers to the Jamieson family.