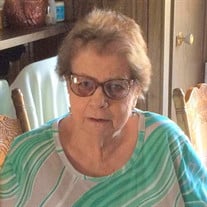 Janis Elaine Summers, age 82, of Lovilia, passed away on Tuesday, December 25, 2018, at the Comfort House in Pella. Janis was born at her home in Milo, IA, on January 7, 1936, to Fred and Phyllis (Morris) Kirkpatrick. She grew up and attended school in different districts in the area, including Bussey and Lovilia. On June 17, 1951, at the age of 15, she married Irven Summers in Lovilia. To this union, 3 children were born, Phyllis (Whicker), William (Summers), and Julie (Doud). Janis and Irven shared 52 years of marriage prior to his passing on May 1, 2004. Janis farmed and raised dairy cows with her husband, worked at Chamberlain’s in Albia and also raised Toy Fox Terrier dogs. She was a former member of the Dallas Christian Church in Dallas, IA and most recently of the Bussey Baptist Church in Bussey, IA. She was a former member of the Lads and Lassies square dancing group. Janis enjoyed being outdoors, especially gardening, and canning goods from her garden. She was a talented seamstress that enjoyed making and collecting dolls and loved quilting. Coming from a family of gifted musicians, Janis played the piano and enjoyed getting together and playing music with other family members and spending time with friends. Janis was very social, never knowing a stranger. Janis is survived by a daughter, Phyllis Whicker and a son, William Summers; 8 grandchildren, Janis (Jeremy) Aldridge, Maria (Aaron) Hartson, Jamie (Patricia) Whicker, Jerry Whicker, James Doud, Jacki (Jack) Stoddard, James Whicker, and Jewel Whicker; 6 great-grandchildren, Alexis (Nikolas) Pettyjohn, Jeremy, Devon, Nathaniel and Aiden Aldridge and Owen Hartson; 2 great-great grandchildren, Adalyn and Brodi Pettyjohn; 3 siblings, William (Mae) Kirkpatrick, James (Barbara) Kirkpatrick, and George (Mary) Kirkpatrick; and a son-in-law, Doug Doud. She is also survived by many nieces, nephews, cousins, and good friends. She was preceded in death by her husband, Irven Summers; a daughter, Julie Doud; and her parents, Fred and Phyllis Kirkpatrick. Visitation will be held from 11:00 a.m. until 8:00 p.m., Friday, December 28, 2018, at the Tharp Funeral Home with Janis’s family present from 1:00-3:00 p.m. to greet family and friends. Funeral services will be held at 10:00 a.m., Saturday, December 29, 2018, at the Dallas Christian Church in Dallas, IA, with Pastor David Abbott officiating. Burial will follow services at Woodlawn Cemetery in Lovilia, IA. An open memorial has been established to the family.

Janis Elaine Summers, age 82, of Lovilia, passed away on Tuesday, December 25, 2018, at the Comfort House in Pella. Janis was born at her home in Milo, IA, on January 7, 1936, to Fred and Phyllis (Morris) Kirkpatrick. She grew up... View Obituary & Service Information

The family of Janis Elaine Summers created this Life Tributes page to make it easy to share your memories.

Janis Elaine Summers, age 82, of Lovilia, passed away on Tuesday,...

Send flowers to the Summers family.