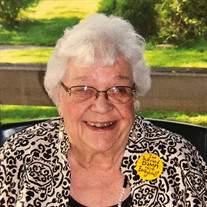 Janet (Reinke) Jenkins, of Albia, passed away Tuesday, August 28, 2018, at Mercy Medical Center in Des Moines. She was born on May 8, 1931, to Karle and Dorcas (Mekkelson) Reinke in Faribault, Minnesota. She graduated from Faribault Public Schools and obtained her Bachelor of Arts degree from Grinnell College in 1952 where she studied special courses in writing, public sector negotiation, mediation, apartment management, and painting. On June 9, 1953, she was united in marriage to James Jenkins. To this union 4 daughters were born, Ellen, Becky, Katy, and Gretchen. Janet and Jim moved to Albia in 1960, where she has been an active volunteer. She served as Monroe County Solid Waste Advisor since 1987, assisting the board of supervisors in research, lobbying, and liaison work with the Department of Mines and Minerals, the Department of Natural Resources and the county’s landfill consultant, Dr. Burton Kross. She served on the County Conservation Board for 15 years, where she was chairman for several years. The board is responsible for the county’s park system, including Lake Miami, the Monroe County Sports Complex, Georgetown rest area and other parks. As a chairman for the last several years of the County REAP (Resource Enhancement and Protection) committee, Janet was named regional delegate to the Iowa REAP congress in 1992. She is a former member of the Albia Community School Board, serving from 1970-1979. She was president for 2 years and served as district negotiator for 3 years, negotiating the original contract. She was a member of Friends of the Library and Restoration Days Committee as publicity chairman. Prior to her years of volunteer service, Janet was the first director of the Albia Low Rent Housing Agency, where she set up housing assistance programs and oversaw the construction of public housing at Parkview Village and other sites in Albia. She was also a social worker at the Monroe County Department of Social Services. Janet was named Monroe County’s Iowa Volunteer of the Year by Farm Bureau/Governor’s Office program in 1989 and was named by the Albia Sorority as their first Woman of the Year in 1975. In 1993, she was inducted into the Albia Hall of Fame. An often-published writer, Janet has won numerous Women’s Press Association awards and in 2000 was one of the key writers who helped the Albia Newspapers win the coveted Iowa Newspaper Association Best Editorial Page Award. As a member of Grace Episcopal Church, she was the first Albia woman licensed as a layreader, a team member on Episcopal Cursillo renewal weekends in Iowa and other states, former organist, vacation church school teacher and pianist and founder of Helpers (Handful of Episcopalians, Lutherans, and Presbyterians). She was also a nursing home visitor, helped with the film and bingo program and was an officer in United Church Women. Janet is survived by her husband of 65 years Jim Jenkins of Albia; her children, Ellen (John) Jennings of Libertyville, IL, Becky (Duffer) Schultz of Iowa City, IA, Katy (John) McGuinnis of Arlington Heights, IL, and Gretchen (Kirk) Douglas of Marshalltown, IA; 16 grandchildren; 3 great grandchildren; and a sister, Gretchen Price of Ottumwa, IA. She is preceded in death by her parents, Karle and Dorcas and a son-in-law, Duffer Schultz. Visitation will be 4:00 p.m. to 8:00 p.m. Friday, September 28, 2018, at the Tharp Funeral Home in Albia, with Janet’s family present from 6:00 to 8:00 p.m., to greet family and friends. A memorial service will be held at 11:00 a.m., Saturday, September 29, 2018, at the St. James Episcopal Church in Oskaloosa with Father Terry Kleven officiating. A private family burial will be held at a later date. Memorials have been established to the St. James Episcopal Church in Oskaloosa or the Carnegie Evans Library in Albia.

Janet (Reinke) Jenkins, of Albia, passed away Tuesday, August 28, 2018, at Mercy Medical Center in Des Moines. She was born on May 8, 1931, to Karle and Dorcas (Mekkelson) Reinke in Faribault, Minnesota. She graduated from Faribault... View Obituary & Service Information

The family of Janet R. Jenkins created this Life Tributes page to make it easy to share your memories.

Send flowers to the Jenkins family.