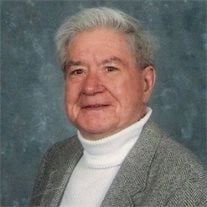 James Edward Wilson, age 79, of Blakesburg, Iowa died Saturday, February 3, 2007 at the Monroe County Hospital, Hospice room in Albia. He was born March 27, 1927 in Fairmont, WV to Max and Nola (Reed) Wilson. He married Dawn Marie DeCosta in Moline ILL. She passed away March 15, 1988. He worked for Nationwide Insurance as an adjustor until retirement. He enjoyed the trains, flying, photography, classical and modern fine arts. He truly loved music for it is what brought him and his wife together. He is survived by his children; Richard Christopher Wilson of Columbus, MS., Joel Wilson of Vero Beach, FL, Jennifer and (Leonard) Elliott of Adair, IA., Jane and (Jay) Rowley of Crawfordville, FL., and Julia Mollette of St. Louis, MO., ten grandchildren, and 2 great grandchildren. One brother, Jack Wilson of Pennsylvania, and one niece and a nephew also survive James. He was preceded in death by his parents, and his wife Dawn, and one grandson in infancy, Nolan Elliott. Memorial Services will be held 10:00 A.M. Tuesday, February 6, 2007 at the Winfield Funeral Home in Albia with Rev. Kevin Leveck officiating. Memorials have been established to go to the family.

The family of James Edward Wilson created this Life Tributes page to make it easy to share your memories.

Send flowers to the Wilson family.