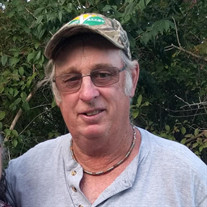 James “Jim” Edward McGee, age 69, passed away on September 22, 2021 at his home in Delta, IA. Jim was born on October 29, 1951 in Albia to Donald and Ruth McGee and raised on the McGee Family Farm. He graduated from Albia High School in 1970. Jim attended Indian Hills Community College before enlisting in the National Guard, serving until 1977. Jim worked on the family farm his whole life. He and his wife retired from farming in 2018 and moved to Delta, IA. Jim enjoyed listening to country music and attending rodeos with his grandsons. He also enjoyed taking his boat out fishing, bow fishing, trail rides on horses, visiting with many friends and family and was an avid hunter and nature lover. Jim married his wife Mary in 1997. Together they spent much of their time on the farm, attending grandchildren’s events, taking trips, and spending time with their beloved dog Gizmo. Jim is survived by his wife, Mary McGee of Delta; siblings Mike (Jean) McGee of Albia, John (Shirley) McGee of Missouri, RuthAnn McGee of Albia; daughter, Cara (Kenny) Emanuel of Albia, Cindy McGee of Florida, Jason McGee of Albia; step daughters, Shana (Buck) Clark of Barnes City, Shayla Stocker (Justin Sievers) of Oskaloosa, and Shalina (Tony) Richie of Kenosha, WI; nephews Patrick and David McGee, Alan T. Brittain, Kevin Brittain; and previous wife, Joyce McGee. James is also survived by 10 grandchildren and 2 great grandchildren. Jim was preceded in death by his grandparents; parents, Donald McGee and Ruth McGee as well as one brother, Donald Lee McGee. Visitation will be held from 2:00 p.m.-8:00 p.m. on Sunday, September 26, 2021, at the Tharp Funeral Home in Albia, with Jim’s family present from 5:00 p.m.-8:00 p.m. to greet family and friends. A Rosary will be held at 5:00 p.m. led by St. Mary’s Altar and Rosary Society. Funeral services will be held at 10:30 a.m. on Monday, September 27, 2021, at the Tharp Funeral Home in Albia, with Father Mark Yates, C.PP.S. officiating and military honors provided by the American Legion of Albia, Melrose, and Lovilia. A private family burial will be held at Memorial Lawn Mausoleum in Ottumwa. A memorial has been established to the family.

The family of James "Jim" Edward McGee created this Life Tributes page to make it easy to share your memories.

Send flowers to the McGee family.