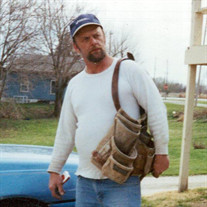 James “Jim” Robert Long, age 61 of Albia, passed away Thursday, December 1, 2016, at his home in Albia. Jim was born April 5, 1955, to Bob and Phyllis (Kingery) Long in Corning, Iowa. He attended school in Corning and Blakesburg. Jim worked alongside his father in his construction business “Long Construction Company”. He was an extremely talented carpenter who helped build many homes, added additions and decks. He enjoyed being outdoors, hunting, fishing and trapping. Jim loved to dance and play his guitar with his friends. His real joy in life was spending time with his family, friends and his dog, Cowboy. He had a special love for his grandchildren who always called him “Gramp” Jim is survived by his companion, Patty Bossard; his daughter, Sarah (Charlie) Lupton; his grandchildren, Hayden Gutcher, Quincy, and Halle Lupton all of Albia; a brother, Tom (Linda) Long of Jefferson; two sisters, Tessa (Duane) Hardee of Red Oak and Maggie (Rick) Morehouse of Cumberland. Jim is also survived by many nieces and nephews. He was preceded in death by his parents, Bob and Phyllis; a brother, MSgt. Philip W. Long; 3 sisters, Kathy Briggs, Jerri Walters and Roberta Townsend. A visitation will be held from 2 p.m-5 p.m., Saturday, December 17, 2016, at Tharp Funeral Home in Albia, with Jim’s family present. No formal services are planned, a private family burial will be held at a later date. A memorial has been established to Jim’s family.

The family of James "Jim" Robert Long created this Life Tributes page to make it easy to share your memories.

Send flowers to the Long family.