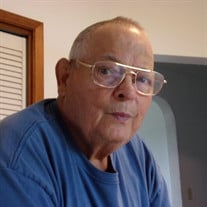 James “Jim” Walter Lenger, age 76 of Bussey, IA, passed away Sunday, April 4, 2021 at Mercy Medical Center in Des Moines. Jim was born December 23, 1944, to Albert and Kathryn (Flahive) Lenger on the farm at home east of Hamilton. He grew up and attended school in Hamilton and later in Lovilia. On October 11, 1969, Jim was united in marriage to Nancy Chance at St. Mary’s Catholic Church in Weller, IA. To this union, 2 children, Jeff and Kevin were born. Jim and Nancy shared 51 years of marriage prior to his passing. After school, Jim worked at Maytag in Newton for 30 years in various positions. He also farmed throughout his adult life. Jim was a member of St. Peter's Catholic Church in Lovilia and the Knights of Columbus in Albia. He enjoyed being outdoors, being on the farm, riding around in his gator and loved his German Shepherd, Blade. He was an avid Iowa Hawkeyes football and basketball fan. Jim cherished spending time with his family and loved attending his children’s and grandchildren’s sporting events. Jim is survived by his wife, Nancy; 2 sons, Jeff (Gena) Lenger and Kevin Lenger; 3 grandchildren, Jacob, Josh, and Aydan Lenger; and 2 sisters, Theresa Lenger and Marge Comer. Jim is also survived by several nieces, nephews, cousins, and good friends. Jim was preceded in death by his parents, Albert and Kathryn; 5 brothers John, Ed, Daniel, David and Joseph Lenger, and a sister, Pauline Conway. Visitation will be held from 2:00 p.m.-8:00 p.m. on Wednesday, April 7, 2021 at the Tharp Funeral Home in Albia, with Jim’s family present from 5:00 p.m.-8:00 p.m. to greet family and friends. A Mass of Christian Burial will be held at 10:30 a.m., Thursday, April 8, 2021, at St. Peter's Catholic Church in Lovilia, with Fr. Mark Yates, C.PP.S. officiating. Burial will follow services in Osborn Cemetery in Monroe County. Memorials have been established to Autism Speaks and the National Kidney Foundation.

The family of James "Jim" Walter Lenger created this Life Tributes page to make it easy to share your memories.

Send flowers to the Lenger family.