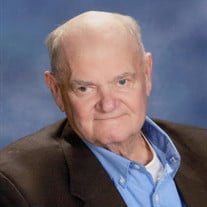 James “Jim” Mardell Hatfield, age 76 of Lovilia, passed away Saturday, September 2, 2017, at Comfort House in Pella, Iowa. Jim was born May 15, 1941, to James Dudley Herberth and Naomi Feral (Haines) Hatfield in Putnam County, Missouri. He attended high school in Cincinnati, Iowa, graduating in 1959. On May 6, 1961, he was united in marriage to Iva Mae VanKampen and to this union 4 children were born, J. David, Daniel, Paul, and Debra Mae. Jim was a farmer, raising cattle and hogs along with numerous other animals, row crops and hay. He also owned and operated Hatfield Plumbing Company. Jim never knew a stranger, liked to work with others and enjoyed helping people. Jim was a member of the Albia Baptist Temple. His faith was important to him at a very young age and he was saved at the age of 7 at Mt. Hermon Church in Missouri. He was a member of the Monroe County Farm Bureau. Jim was talented at woodworking and enjoyed making a variety of things including furniture and toys for the grandchildren. He collected Farmall and Ford/New Holland toy tractors, bottles, and caps. He also loved to sing Southern Gospel music. Above all, Jim loved spending time and visiting with his family and friends, especially his grandchildren. Jim is survived by his wife of 56 years, Iva Mae Hatfield, 3 sons, J. David Hatfield (Kevin Smith), Daniel (Doni) Hatfield, and Paul (Brenda) Hatfield; a daughter, Debra Mae (Sam) Santee; 8 grandchildren, Claire, Andrew, Holly, Millie, Anita, Kamy, Logan, and Rebecca; and a great-grandson, Peyton James. He is also survived by a sister, Jean Amos. Jim was preceded in death by his parents, James and Naomi; his stepmother, Clara Hatfield, a brother, Fred Hatfield; sisters, Mavis Cormeny, Ann Starks, and Elaine Hatfield; a stepbrother, Karol Kimm; and eight half brothers and sisters. Funeral services will be held at 10:00 a.m., Tuesday, September 5, 2017, at the Albia Baptist Temple in Albia, with Pastor Brian Harris and Pastor Andy Tuttle officiating. Burial will follow the service at Mt. Hermon Cemetery is Chariton, Missouri. Visitation will begin at 1:00 p.m. until 8:00 p.m., Monday, September 4, 2017, at the Albia Baptist Temple in Albia, with Jim’s family present from 6:00 p.m. until 8:00 p.m. Monday evening to greet family and friends. An open memorial has been established in James’s name to be determined at a later date by the family.

The family of James "Jim" Mardell Hatfield created this Life Tributes page to make it easy to share your memories.

Send flowers to the Hatfield family.