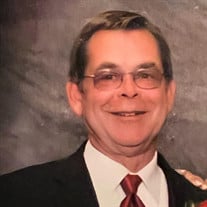 James “Jim” Henry Beaumont, age 75, of Albia, Iowa, passed away on Monday, January 10, 2022, at the Monroe County Hospital in Albia, surrounded by his loved ones. Jim was born on January 25, 1946, to Virtus Sylvester and Mary Lois (Britten) Beaumont in Creston, Iowa. He attended grade school in Oskaloosa and later attended school in Albia, graduating with the Class of 1964. On September 9, 1972, he was united in marriage to Geraldine Williams at St. Patrick’s Catholic Church in Georgetown and to this union, 3 children were born, Jimmy, Jody, and Jerry. Jim and Gerri later divorced. Following high school, Jim was drafted and served his country in the United States Air Force until he was honorably discharged due to a back injury. Jim was a parts man for Albia Auto and later Henderson Implement; he retired from the Hy-Vee Distribution Center. He enjoyed getting to know his customers over the years. Into retirement he continued to help his oldest son Jimmy “Pete” on the farm and his youngest son Jerry “Josh” with hauling equipment. In his younger years, Jim was an athlete who held the first shut out no hitter as a pitcher for Monroe County Little League back in the 1950’s. Jim later enjoyed bowling and slow pitch softball leagues. He volunteered as a peace officer for Monroe County and served on the Albia Fire Department. He enjoyed spending time with his kids and grandkids, playing cards, wood working, being outdoors, hunting, and going to auctions. Making friends came easy to Jim, he had nicknames for everyone he knew, was always up for a good chat, joking, and teasing while flashing his ornery smile and chuckling the whole time. Jim had a sweet tooth and never was one to say no to candy or dessert. Above all else, Jim was an avid wing and non-wing sprint car fan. His love for sprint car racing began back in the 60’s racing go-carts which led him to the Knoxville Raceway. He worked on the pit crew for driver Jerry Blundy’s #33 race cars, which he did into the 80’s. He later helped a new comer Tommy Scott driver of the 74s in the early 90’s. Most recently, he had developed a friendship with driver Tony Stewart whom he often picked up at the airport when Tony came to Iowa to race on dirt. Jim’s love for racing led him around the United States visiting numerous dirt tracks and meeting race fans and drivers that have become lifelong friends. If one did not know about sprint cars before talking to Jim, they sure did after. He enjoyed getting out and would often be seen driving around town in his Red Ford Ranger making his known stops to visit friends and acquaintances. Overall Jim enjoyed people, giving free advice, and cherished every conversation he had. Jim is survived by his children, Jimmy Beaumont, Jody (Josh) Buckingham, and Jerry (Stephanie Allgood) Beaumont; 5 grandchildren, Lily, Meredith, Beau, Jayse, and Slayton; a sister, Chris (Terry Curry) Yarkosky, and brother-in-law, Steve Yarkosky. Jim is also survived by many nieces, nephews, cousins, and good friends. Jim was preceded in death by his parents, Virtus and Mary and a sister, Carol Ann Kraber. Visitation will be held from 2:00 p.m.-7:00 p.m. on Sunday, January 16, 2022, at the Tharp Funeral Home in Albia, with Jim’s family present from 4:00 p.m.-7:00 p.m. to greet family and friends. A Christian Wake service will be held at 6:30 p.m. A Mass of Christian Burial will be held at 10:30 a.m. on Monday, January 17, 2022, at St. Mary’s Catholic Church in Albia, with Father Mark Yates C.PP.S. officiating. Burial with military honors provided by the American Legion of Albia, Melrose and Lovilia will follow services at St. Mary’s Cemetery in Albia. A memorial has been established to Monroe County Little League or the Welcome Home Soldier Monument in Albia.

The family of James "Jim" Henry Beaumont created this Life Tributes page to make it easy to share your memories.

Send flowers to the Beaumont family.