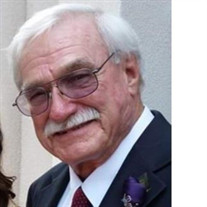 James DeWayne Jenkins, age 88, of Marshalltown, formerly of Albia, passed away on Saturday, April 18, 2020, at the Willows of Marshalltown in Marshalltown, Iowa. James was born Jan. 4, 1932 in Burlington, Iowa to Dr. G. D. and Ruth (Reddish) Jenkins. He graduated from Kent School in Kent, CT in 1949 and from Grinnell College in 1953. The day after his college graduation, he married Janet Reinke in Faribault, MN and soon after was drafted into the Army where he served for two years in Stuttgart, Germany and was joined by his bride. After his military service ended, Jim attended law school at the University of Iowa and graduated with a JD in 1958. After working in Des Moines for a couple of years, he moved to Albia in 1960 and joined the law firm of his uncle Alfred Pabst. That same year, he ran for Monroe County Attorney, and won by two votes, earning the nickname “Landslide Jenkins.” He served as Monroe County Attorney for 14 years until he was appointed to the Iowa District Court as a judge for the tenth circuit in 1978. Jim retired to his home on the Hilltop west of Albia in 1996. Jim was a long-time member of Grace Episcopal Church, where he served as a lay reader and a member of the vestry. He was a member of the Lions Club and Rotary Club and served as a member of the library board as well. He was an avid learner, a diehard Iowa Hawkeye fan, and an unrepentant serial hobbyist. He loved to read, camp, travel, garden, motorcycle, sail, build and fly RC planes, pilot his light plane, raise fish, catch fish, can, and bake, but he most of all loved his family. He carried in his wallet his favorite quote by Rev. Theodore Hesburgh: “The most important thing a father can do for his children is to love their mother.” He is survived by daughters, Ellen (John) Jennings of Libertyville IL, Becky Schultz (Glen Forgy) of Iowa City, Katy (John) McGuinnis of Arlington Heights IL and Gretchen (Kirk) Douglas of Marshalltown; grandchildren, Laura, Annie, Zoey, Phoebe, Glee, Alex, Benji, Madelyn, John, Isabelle, Lisa, Julie, Tom, Stephanie and Ian; great grandchildren, Lily, Mason, and Jackie; a sister-in-law, Gretchen Price; a niece, Alison Preuninger; and a nephew, Karl Price. Jim was preceded in death by his parents George DeWayne and Ruth Jenkins, sister Zoe Jenkins, wife Janet, son-in-law Duffer Schultz; his niece, Dana Hols; and many furry friends. Visitation will be held from 4:00 p.m.-8:00 p.m. on Friday, June 18, 2021, at the Tharp Funeral Home in Albia, with Jim’s family present throughout to greet family and friends. A memorial service will be held at 11:00 a.m. on Saturday, June 19, 2021, at St. James Episcopal Church in Oskaloosa, IA, with Father Terry Kleven officiating. Memorials preferred to St. James Episcopal Church in Oskaloosa, the Albia Public Library or Avalon Hospice of West Des Moines.

James DeWayne Jenkins, age 88, of Marshalltown, formerly of Albia, passed away on Saturday, April 18, 2020, at the Willows of Marshalltown in Marshalltown, Iowa. James was born Jan. 4, 1932 in Burlington, Iowa to Dr. G. D. and Ruth (Reddish)... View Obituary & Service Information

The family of James DeWayne Jenkins created this Life Tributes page to make it easy to share your memories.

Send flowers to the Jenkins family.