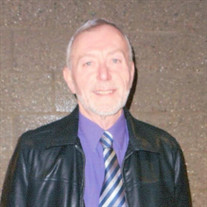 James “Jim” Dale Gillen, age 67, of Zeeland, MI, passed away on September 6, 2021, at his home. Jim was born on September 27, 1954, at the Albia Hospital to Chester A. Sr. and Margaret Louise (Forney) Gillen. He attended one year of country school at Williamson #1 before attending Moravia schools and graduating from the Moravia High School with the Class of 1972. He was united in marriage to Cathy at the Christian Church in Blakesburg, IA. Jim worked in factories the majority of his adult life, most recently roll forming auto parts. He was also an over the road truck driver at one time. In his younger years, Jim was active in the FFA. He enjoyed riding motorcycles, being outdoors, and gardening. He also enjoyed wood turning, making bowls and other items. Jim enjoyed spending time with his family and friends, especially his nieces and nephews. Jim is survived by 3 siblings, Judy (Edward) Richards of Ottumwa, IA, Chester Gillen Jr. of Blakesburg, IA, and Jerry Gillen of Ottumwa, IA. Jim is also survived by several nieces, nephews, cousins, and good friends. Jim is preceded in death by his wife, Cathy; his parents, Chester and Margaret; and a brother, John Gillen. Visitation will be held from 9:00 a.m.-11:00 a.m. on Saturday, October 2, 2021, at the Tharp Funeral Home in Albia, with Jim’s family present to greet family and friends. A memorial service will be held at 11:00 a.m. on Saturday, October 2, 2021, at the Tharp Funeral Home in Albia, with Pastor Chris Harris officiating. A private family burial will be held at a later date. A memorial has been established to the Blakesburg Cemetery in Blakesburg, Iowa.

The family of James Dale Gillen created this Life Tributes page to make it easy to share your memories.

Send flowers to the Gillen family.