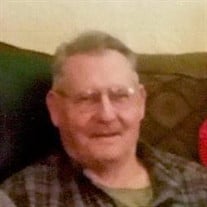 James Russell Darby Jr, age 77, of Albia, passed away Sunday, October 22, 2017 at Mercy Medical Center in Des Moines. James was born on September 12, 1940 to J. Russell Sr. and Dorothy Alice (Boardman) Darby at home in Monroe County, Iowa. He grew up and attended the Moravia High School graduating with the Class of 1958. On May 31, 1970 he was united in marriage to Catherine Schoolen in Albia. James and Catherine shared 29 years of marriage together until her passing on March 26, 2000. James was employed to do survey work for the D.O.T. for a short time. He then worked at Chamberlains in Albia until the company closed. James lastly did small engine repair work for the various John Deere Dealerships around the area. He had a love for trains. James was a member of several train clubs and enjoyed collecting them and attending train swap meets. He never knew a stranger and enjoyed conversation. His real joy in life was spending time with his family and friends. He is survived by his two children, Mark (Debbie) Jackson of Albia and Robin Bettis of Des Moines; five grandchildren, Crystal (Chad) Muck, Tim Jackson, Lindsay (Michael) Smead, Kendra Jackson and Jennifer Reich; ten great grandchildren, Chloe, Damon, Isabella, Rylie, Ryan, Delanie, Aiden, Justice, Isaiah and Finnley. James is also survived by a sister, Barbara (Jerry) Coop of Blakesburg; and two cousins. He was preceded in death by his wife, Catherine Darby; his parents, J. Russell Sr. and Dorothy Darby and a brother in infancy, William. A memorial service will be held at 10:30 a.m., Friday, October 27, 2017 at the Tharp Funeral Home in Albia, with Father Mike Volkmer C.PP.S. officiating. Burial will follow with services at the Woodlawn Cemetery in Lovilia. Visitation will be held from 1:00 p.m.-8:00 p.m., Thursday, October 26, 2017 at the Tharp Funeral Home in Albia with James’s family present from 6:00 p.m – 8:00 p.m., to greet family and friends. A memorial has been established to the Woodlawn Cemetery and Eslinger Cemetery.

The family of James Russell Darby Jr. created this Life Tributes page to make it easy to share your memories.

Send flowers to the Darby family.