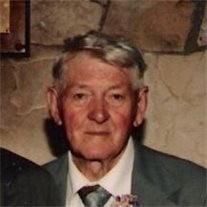 James Frankel Curtis, age 91, of Centerville, Iowa former resident of Promise City, Iowa died Monday, September 11, 2006 at the Mercy Medical Center in Centerville, Iowa. He was born June 2, 1915 in Plano, Iowa to Clell Franklin and Flo Irene (Fenton) Curtis. He married LaVaughn Rose Turney on September 2, 1937 in Unionville, Missouri having just celebrated 69 years of marriage. James attended the Jones country school in Appanoose County. He was a blacksmith and welder having owned and operated Curtis' Welding and Machine in Promise City and also operated a sawmill in Promise City. He was baptized May 11, 1952 with his son, Almos and daughter, Zelda. He was a member of the Jehovah's Witness for 54 years having served as an elder for 14 years in the Centerville congregation. He is survived by his wife, LaVaughn Curtis of Centerville; one daughter, Zelda (Wayne) Burghoffer of Des Moines; and one son, Larry (Shirley) Curtis of Albia; 10 grandchildren: Clarissa, Daniel, Lori, Chad, Fredericka, Matthew, Wade, Melanie, James, and Tessa; 7 great grandchildren: Leah, Thadeaus, Austin, Gabriel, Rachel, Olivia, and Gordon. Also surviving are 3 brothers: Eston Curtis of Promise City, Don and Dale Curtis both of Des Moines; and two sisters, Leta Dueland of Des Moines and Letty McCarty of Promise City. James was preceded in death by his parents; one son, Almos Ray Curtis; one granddaughter, Tabitha Rae Curtis; one sister, Leota Cooper; and one brother, Harley Eugene Curtis. Cremation was accorded by family wishes. Memorial services will be held at 3:00 P.M. Saturday, September 16, 2006 at the Winfield Funeral Home in Albia with Greg Ismailidis of the Centerville congregation of Jehovah's Witness officiating. Private family burial of cremains will be held at a later date. Visitation will be held Saturday, September 16, 2006 from 2:00 P.M. until 3:00 P.M. with the family present at the funeral home. Due to family allergies, only silk arrangements or plants will be accepted. A memorial has been established to the congregations of Jehovah's Witness.

The family of James Frankel Curtis created this Life Tributes page to make it easy to share your memories.

Send flowers to the Curtis family.