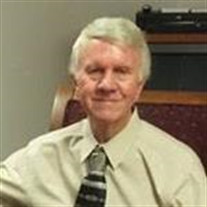 Jackie “Jack” Harold Manley, age 77, of Albia, passed away on Thursday, July 30, 2020, at the Fountain West Health Center in West Des Moines, IA. Jack was born on April 15, 1943, to Cecil and Mamie (Hurd) Manley, at the Monroe County Hospital in Albia. He grew up attending school in Albia and graduated from the Albia High School with the Class of 1961. Following high school, Jack served his country in the United States Air Force for 4 years, stationed in Okinawa, Japan and Oklahoma. Jack was united in marriage to Frances Kausalik on May 18, 1966, at St. Mary’s Catholic Church in Albia and to this union 2 children were born, Monica and Michael. Jack and Frances shared 54 years of marriage prior to Jack’s passing. Jack has had many jobs over the years. Upon returning home from the service, Jack worked at Trophy Glove in Albia before going to work at Hormel in Ottumwa. He also worked at Maytag in Newton, sold insurance, sold water softeners and drove a dump truck all before he and Frances owned and operated the Maid Rite in Chariton and later the Main Street Café in Albia for several years. Jack was very talented and was a “Jack of all trades.” He was a handyman who could fix anything and was a gifted woodworker. He enjoyed hunting and fishing and loved to cook. Jack was very family oriented and above all else, he enjoyed spending time with his family. Jack is survived by his wife, Frances Manley; his children, Monica (Steven) Wagner of Marion, IA and Michael (Cami) Manley of Waukee, IA; 4 grandchildren, London, Garret, Cole, and Brynn; a brother, Dennis Manley; 5 sisters-in-law; 2 brothers-in-law; and many nieces and nephews. He is preceded in death by his parents, Cecil and Mamie; his parents-in-law, Harold and Betty Kausalik; 2 brothers, Edwin and Bobby Manley; a sister, Martha; and 2 brothers-in-law, Marty and Larry Kausalik. Visitation will be held from 1:00-2:00 p.m. on Sunday, August 16, 2020, at the Tharp Funeral Home in Albia with Jack’s family present to greet family and friends. A memorial service will be held at 2:00 p.m. on Sunday, August 16, 2020, at the Tharp Funeral Home in Albia with Pastor Richard Grimes officiating. Burial with military rites provided by the American Legion of Albia, Melrose and Lovilia will follow services at St. Mary’s Catholic Cemetery in Albia. An open memorial has been established to the family to be determined at a later date. Memorials and cards of condolences may be sent to Monica Wagner at 2135 Edwin CT, Marion, Iowa 52302.

The family of Jackie "Jack" Harold Manley created this Life Tributes page to make it easy to share your memories.

Send flowers to the Manley family.